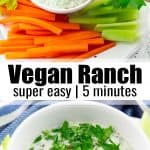 This vegan ranch is not only super creamy and tangy but also incredibly easy to make. It’s great as a dip with veggie sticks, cauliflower wings, or as a salad dressing. And it’s ready in less than 5 minutes! 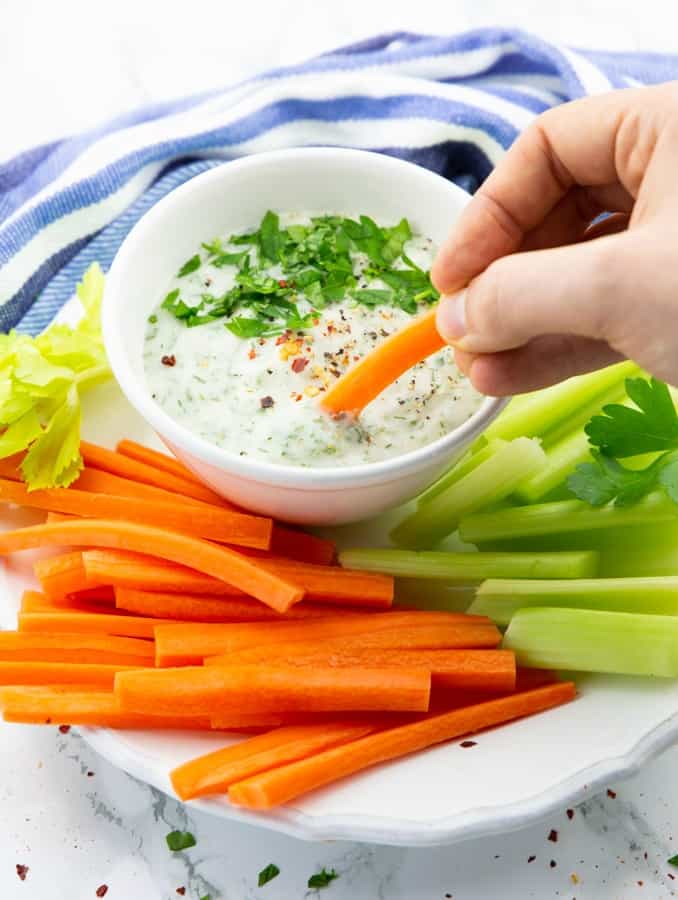 Did you know that in 2017 forty percent in the U.S. named ranch as their favorite dressing? It’s also extremely popular as a dip with vegetables or other finger food. So of course we needed a vegan version of ranch on the blog! And the recipe couldn’t be much easier!

No, ranch dressing is usually not vegan as it’s made of a combination of mayonnaise and buttermilk. Besides, ranch dressing contains garlic, onion, herbs (mostly chives, parsley, and dill) and spices (black pepper and paprika).

However, it’s very easy to make a vegan version of ranch dressing as you can just replace the regular mayonnaise with vegan mayonnaise and leave out the buttermilk.

What You Need For The Vegan Ranch: 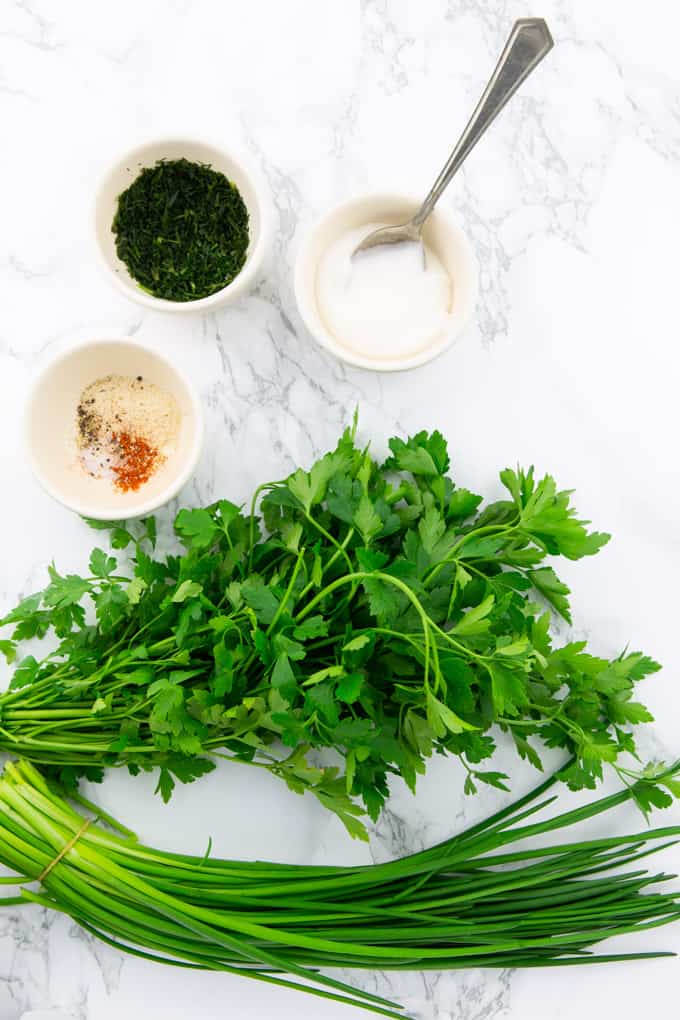 What kind of vegan mayonnaise?

If you’ve trouble finding vegan mayonnaise or if you’re looking for a cheaper version, you could also use homemade vegan mayonnaise. All you need is a blender, oil, soy milk, and apple cider vinegar.

Why did I use apple cider vinegar for my ranch?

Ranch dressing is often made with a combination of buttermilk and mayonnaise. To give our vegan ranch dressing its typical creamy and tangy taste, we added a teaspoon of apple cider vinegar instead of using buttermilk.

How To Make Vegan Ranch:

The recipe for the vegan ranch dressing couldn’t be much easier. You don’t have to do much and it’s ready in less than 5 minutes. 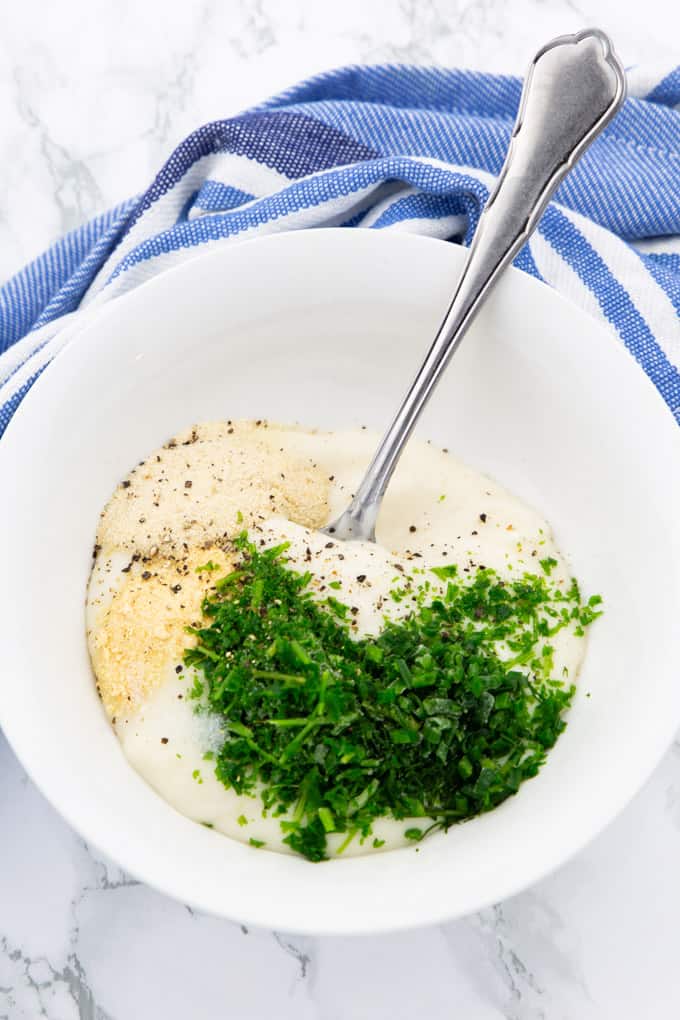 Combine all ingredients in a bowl and stir well. If you’re using the vegan ranch as a dressing for a salad, I recommend adding more plant-based milk to make the ranch thinner. Always make sure the plant-based milk you use is unsweetened.

My Favorite Ways to Use This Vegan Ranch Dressing:

There are so many great ways to use this ranch. Here are my favorite ideas: 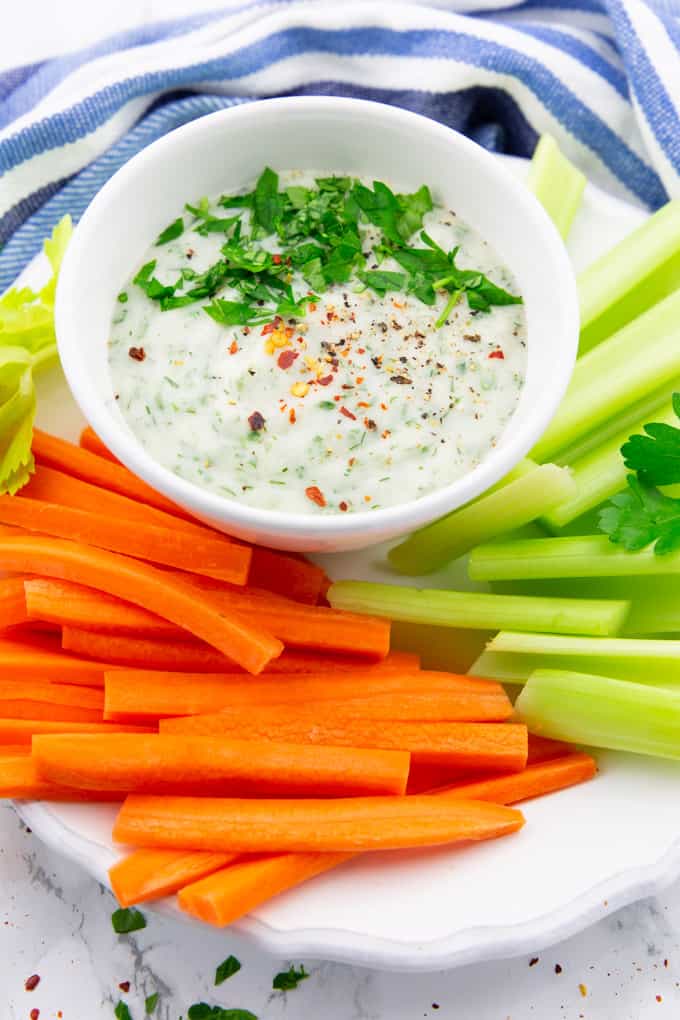 Can you make vegan ranch without mayonnaise?

Yes, it’s definitely possible to make vegan ranch without mayo. You could, for example, use cashews as a base instead of vegan mayonnaise. However, you need a high speed blender to turn cashews into a creamy sauce.

For vegan ranch with cashews: Replace the mayonnaise with 1 cup of cashews and 1/2 cup of water. Then follow the rest of the recipe.

If you’re looking for a lighter version, you could replace the vegan mayonnaise with unsweetened plant-based yogurt or silken tofu.

However, if you’re looking for an authentic vegan ranch that comes pretty close to the real thing, I would recommend using vegan mayonnaise.

I hope you like this vegan ranch dressing as much as we do around here. It’s the best vegan ranch I’ve had so far.

If you give it a try, I’d love to know what you think about it. Just leave me a comment and a star rating below. Your comments really make my day! 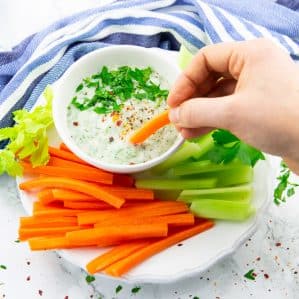 This vegan ranch is not only super creamy and tangy but also incredibly easy to make. It's great as a dip with veggie sticks, cauliflower wings, or as a salad dressing. And it's ready in less than 5 minutes!
5 from 4 votes
Print Pin Rate
Course: Dip, Salad
Cuisine: American
Prep Time: 5 mins
Total Time: 5 mins
Servings: 6 people
Calories: 243kcal
Author: Sina