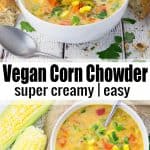 This vegan corn chowder with potatoes is super creamy and so comforting! It’s the perfect soup for spring and summer! Besides, it makes such a great and healthy vegan dinner! And it’s very budget-friendly! 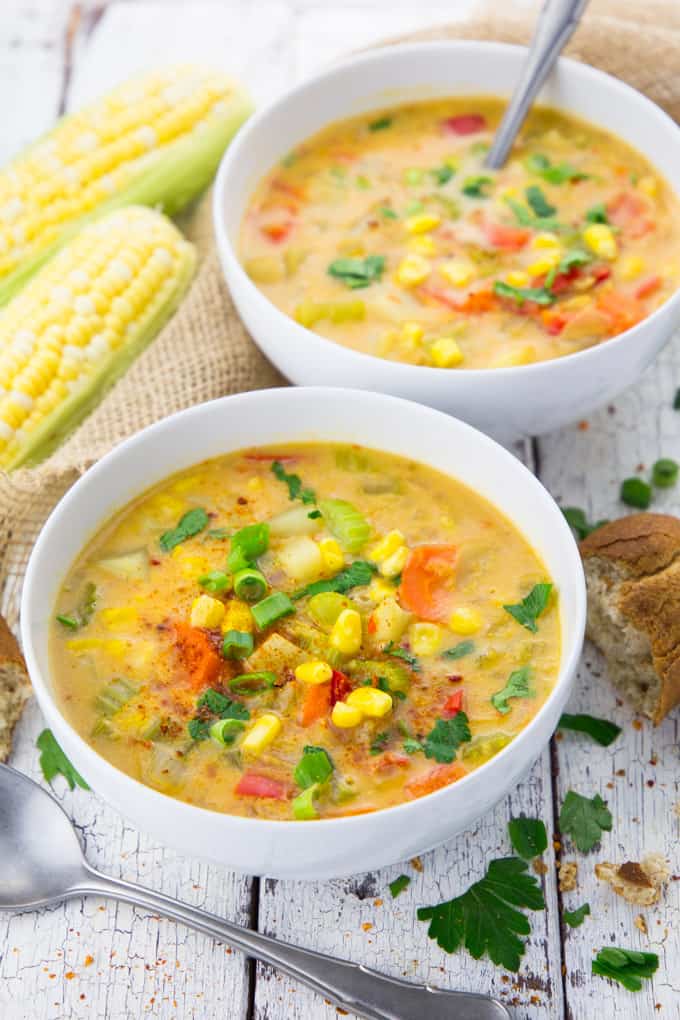 What Is Corn Chowder?

As its name suggests, corn chowder is a thick soup that is primarily made of corn. Other common ingredients are onions, celery, and milk or cream. Some recipes also call for potatoes, carrots, and sometimes even for fish, chicken, or seafood. Corn chowder is a very popular soup in the United States. It has been around for more than a century. It first appeared in the Boston Cook Book by Mary Lincoln in 1884. Nowadays, corn chowder is a mass-produced food in the U.S. that is available in cans, for example by the Campbell Soup Company. Homemade corn chowder is of course so much better than store-bought! 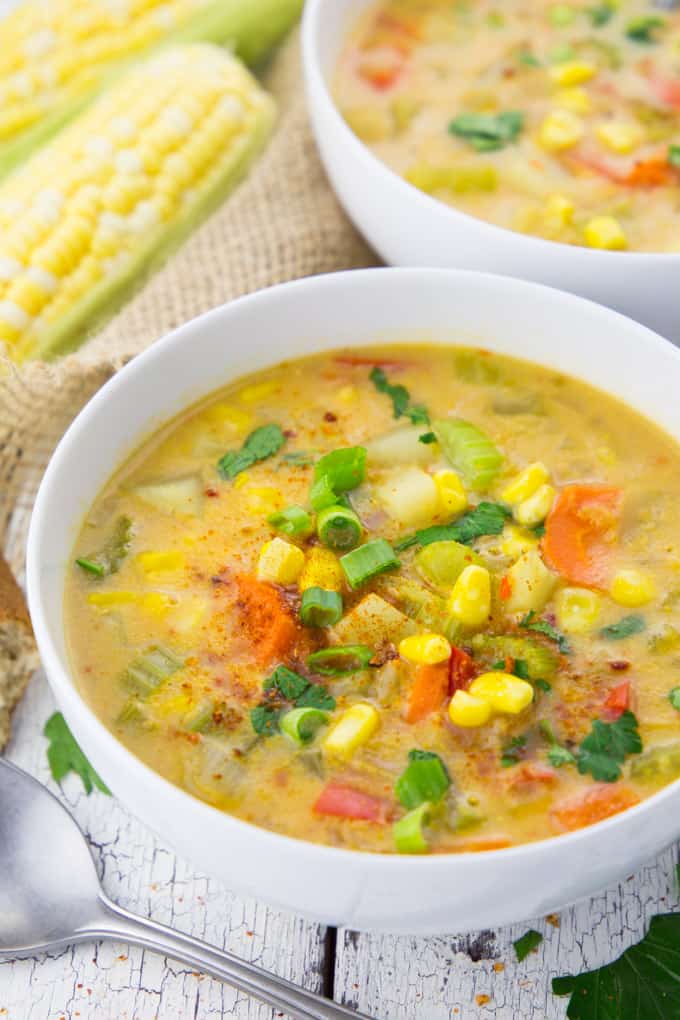 Corn chowder is similar to the popular New England clam chowder. However, for corn chowder corn is used instead of clams, which makes it vegetarian. It can also be made vegan by using coconut milk or almond milk instead of cow’s milk or cream. For a vegetarian or vegan version, just use vegetable broth instead of the chicken stock many recipes call for.

What You Need For This Vegan Corn Chowder

The recipe for this vegan corn chowder with coconut milk couldn’t be easier. You don’t need a lot of ingredients and all ingredients are easy to find in any regular grocery store.

As always, you can find the full ingredient list and the recipe instructions in a separate, printable recipe box at the end of this post. 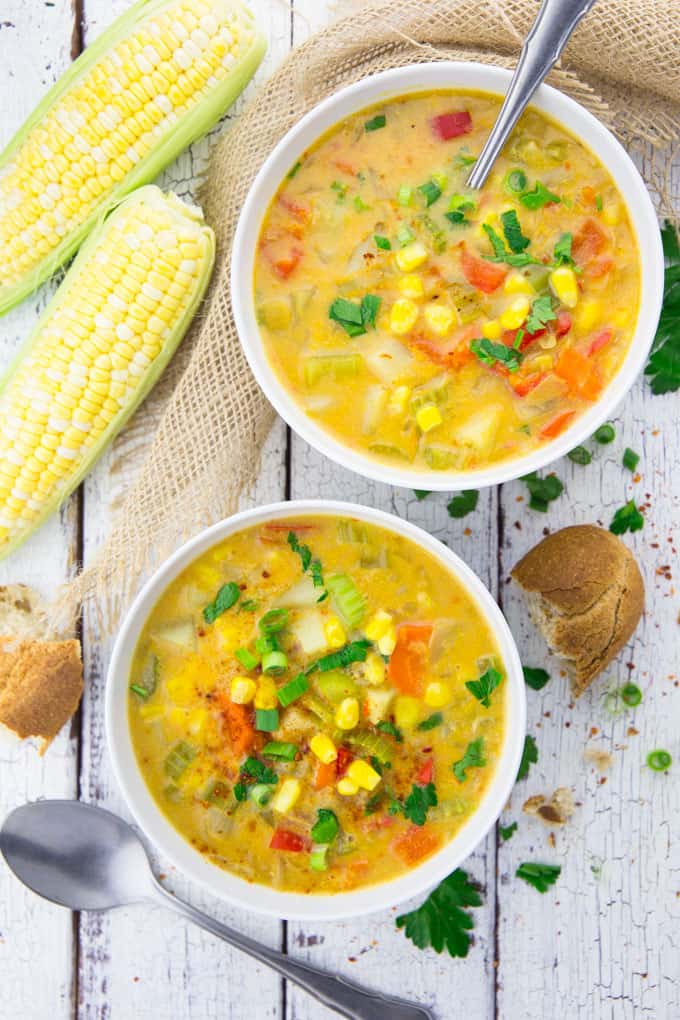 How To Make Vegan Corn Chowder 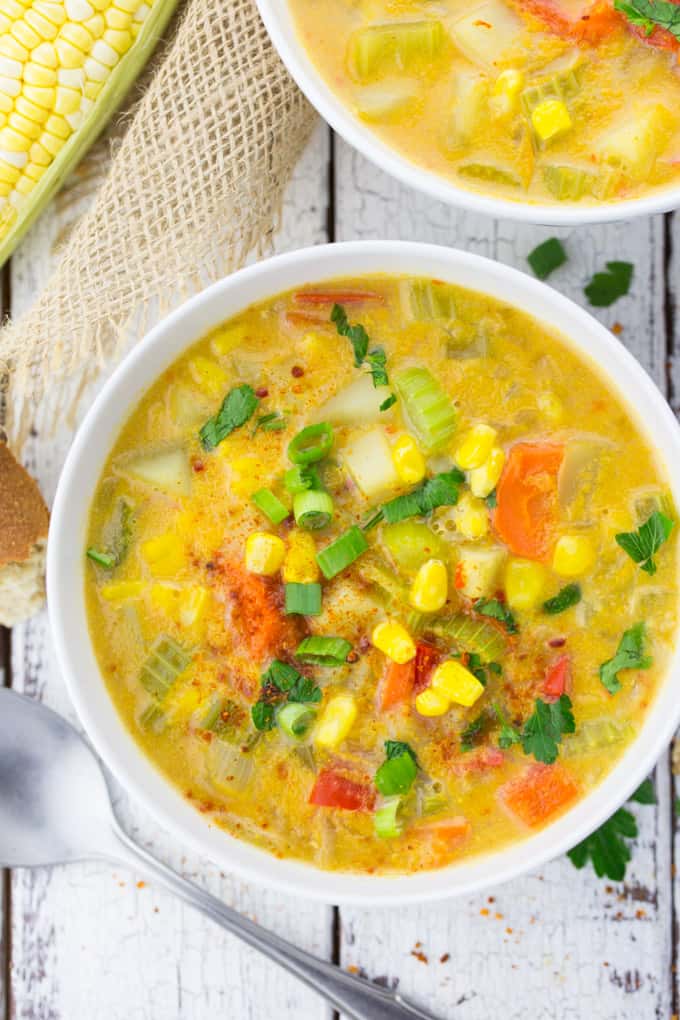 How To Thicken Corn Chowder

My favorite way to thicken corn chowder is using pureed corn. I usually use about five cups of corn of which I puree two cups with canned coconut milk and some almond milk. I then add the puree to the soup, which makes it super creamy. Besides, I also add potatoes to the corn chowder. Their starch provides thickness as well. If you want the corn chowder to become even thicker and creamier, you could also add corn starch or potato starch.

Another way to thicken up corn chowder is by starting off with a flour roux. This is mostly used for thick sauces, like bechamel or also for gumbo. Cream usually doesn’t help to thicken up soup. They just make it richer. You could also save some of the corn chowder and then puree the rest with an immersion blender. Then just add the remaining soup for some texture. I love using my immersion blender instead of my vitamix for foods that are easy to blend like soup. It’s super practical and there are so many different ways on how to use an immersion blender. 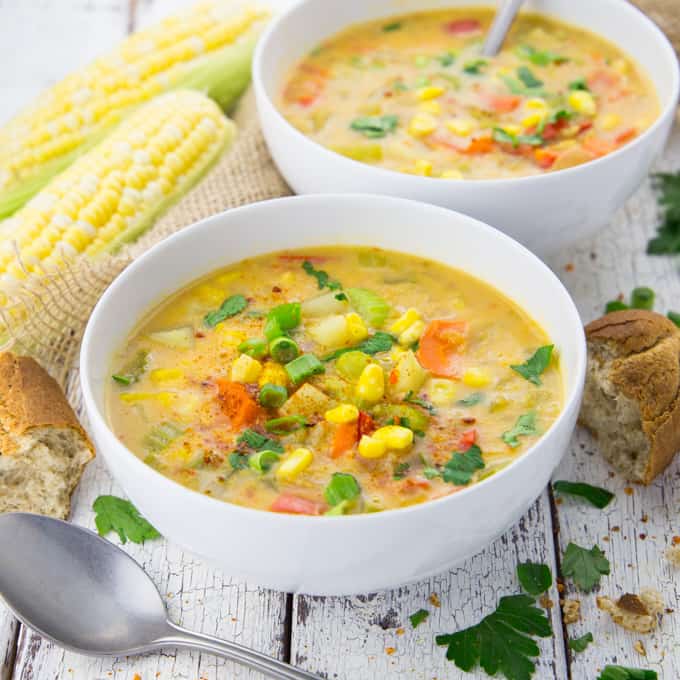 I hope you like this vegan corn chowder with coconut milk as much as we do around here! If you’re looking for more vegan soup recipes, you could also check out my quinoa soup with kale or my Italian garbanzo bean soup. They’re both super healthy and filling and we’ve made them sooo many times. And if you still looking for more, I also got a giant roundup of 30 hearty vegan soup recipes. 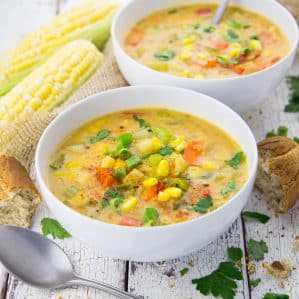 This vegan corn chowder with potatoes is super creamy and so comforting! It's the perfect soup for spring and summer! Besides, it makes such a great and healthy vegan dinner! And it's very budget-friendly!
4.79 from 32 votes
Print Pin Rate
Cuisine: American
Prep Time: 10 mins
Cook Time: 20 mins
Total Time: 30 mins
Servings: 4 servings
Calories: 364kcal
Author: Sina

** If you want the vegan corn chowder to be a bit thicker, please check out the suggestions I made in the text above under the headline " How to Thicken Corn Chowder" **