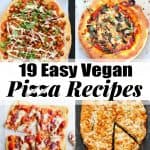 Who doesn’t love pizza? It’s the ultimate comfort food, isn’t it? These 19 drool-worthy vegan pizza recipes will impress vegans, vegetarians, and meat-eaters alike! Just because vegans don’t eat cheese they definitely don’t have to miss out on pizza! These 19 vegan pizza recipes are the perfect proof! 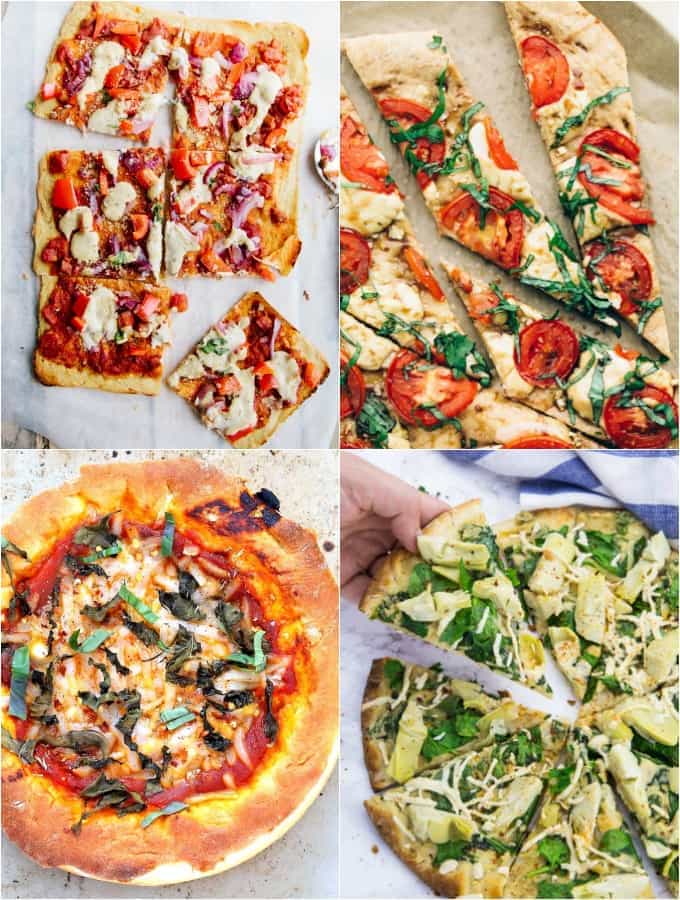 When I was a kid, we always had pizza on Friday nights and we were so looking forward to that. We called it our “Friday night pizza parties”. We made a huge pizza and then we were allowed to stay up until ten and watch TV with our parents or play games. Good times!

Now that I’m vegan, I still love pizza and there are soooo many delicious vegan pizza recipes!

Here are some examples of the vegan pizza recipes that are included in this roundup:

As always, you have to click on the title above each photo to see the recipe.

So let’s get this pizza party started! I hope you like these vegan pizza recipes as much as I do! 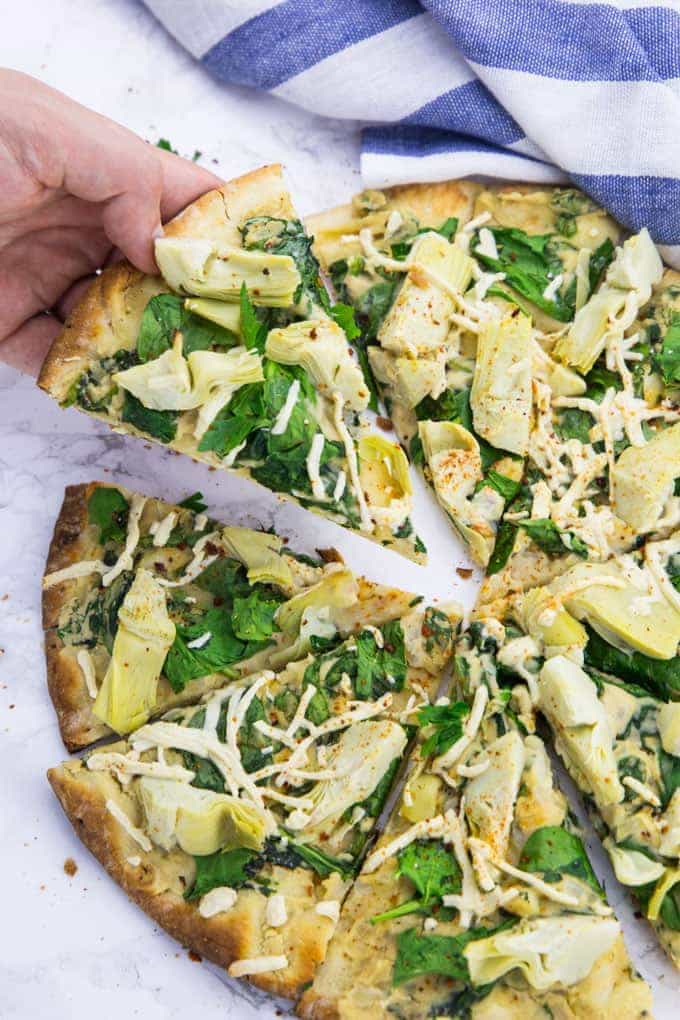 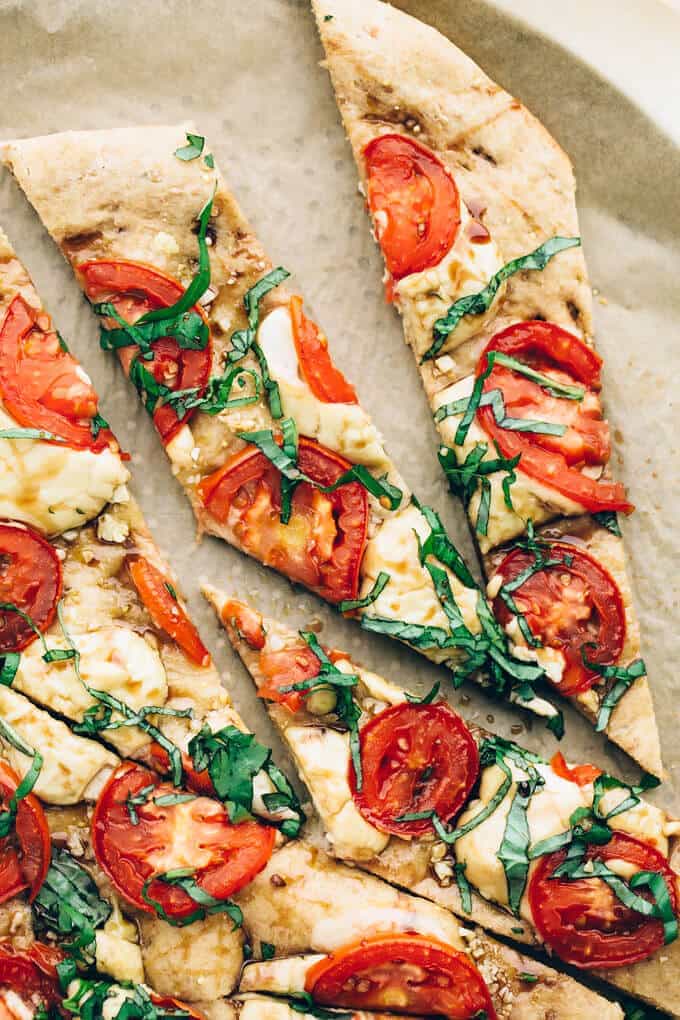 This vegan caprese pizza by Ashley from Blissful Basil is a dream come true. It’s super crispy and bubbly and topped with homemade cashew mozzarella. And for some extra flavor, Ashley added balsamic reduction. 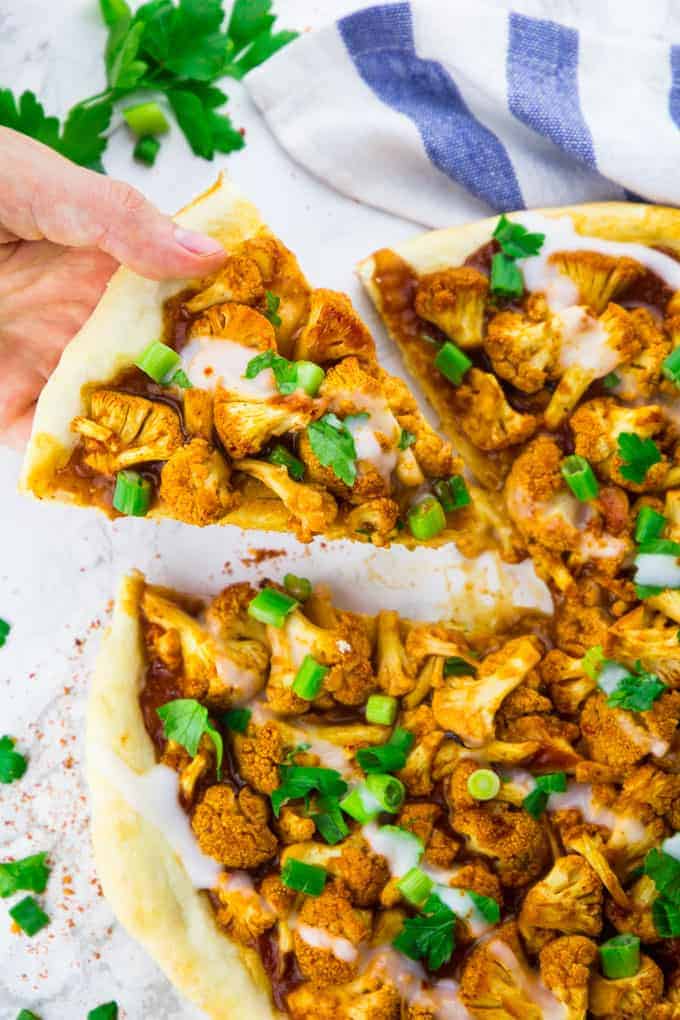 This vegan BBQ pizza with crispy cauliflower and garlic sauce is the perfect comfort food! It’s very easy to make and so delicious! This vegan cauliflower pizza is basically a vegan version of BBQ chicken pizza. But instead of chicken the recipe calls for cauliflower, which makes it so much healthier. 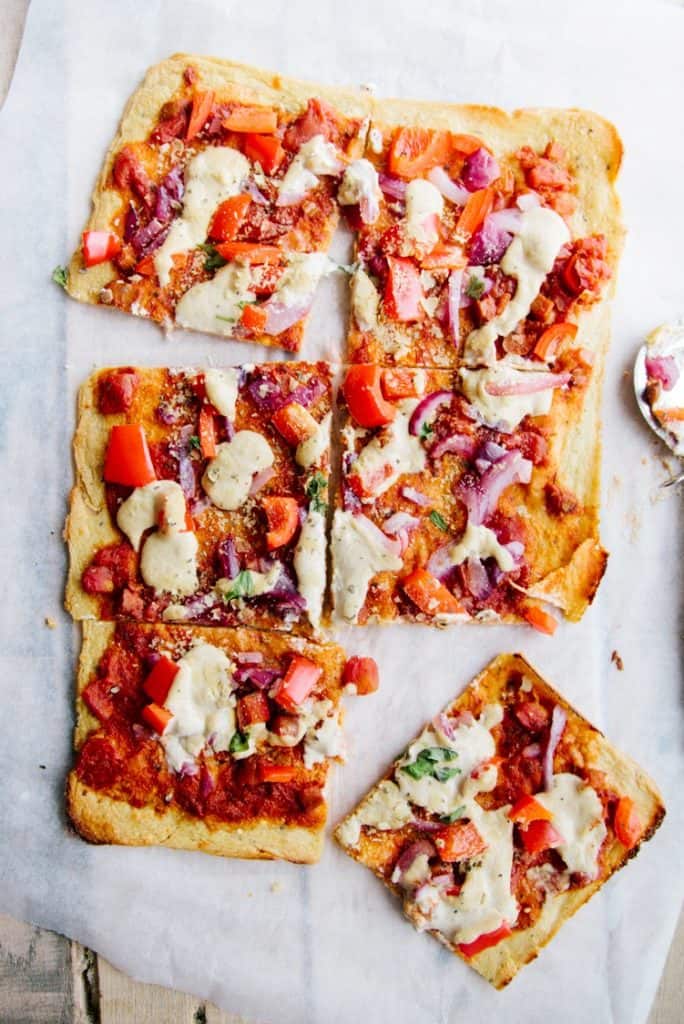 This vegan and gluten-free socca pizza by Aimee from Wallflower Kitchen is made by mixing chickpea flour with water and a water and a bit of olive oil, adding to a pan and baking at a high heat. It’s an Italian recipe and it’s perfect if you’re looking for a gluten-free pizza base. 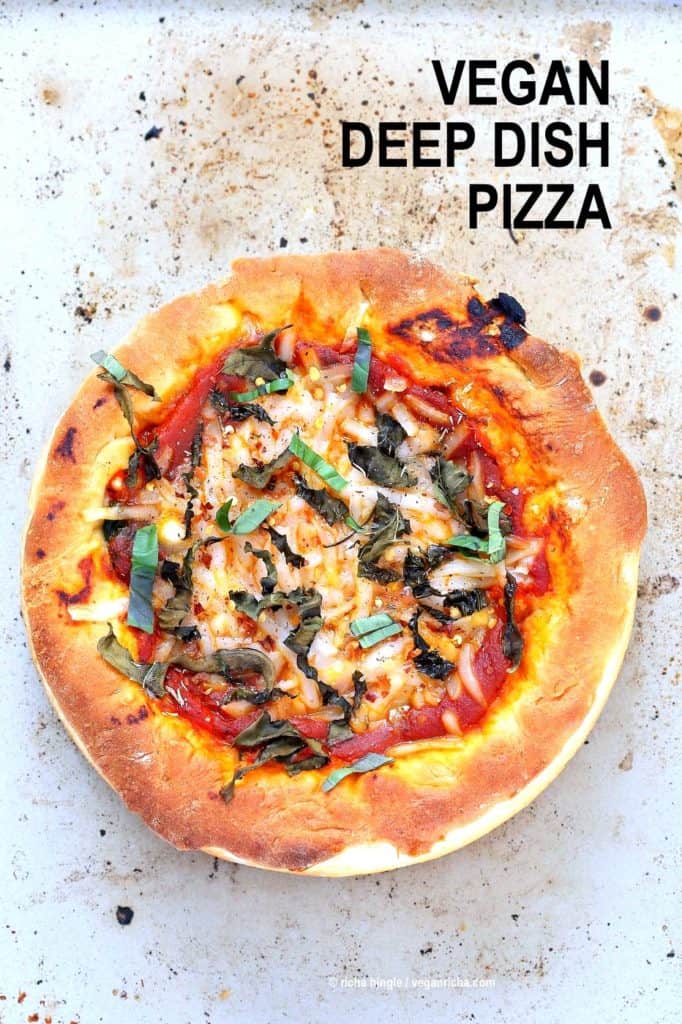 If you like deep dish pizza, this vegan deep dish pizza by Richa from Vegan Richa is the perfect recipe for you. It’s topped with red pepper, spinach, vegan mozzarella, and basil. 20 minutes is all you need for this pizza! 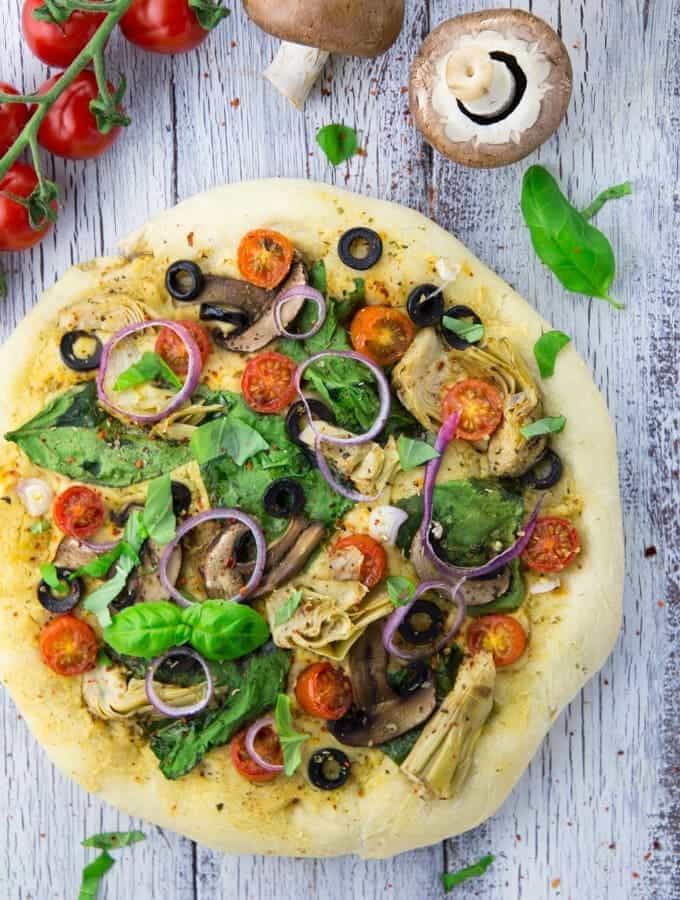 If you like hummus, you will LOVE this hummus pizza with artichokes, spinach, and olives. It’s one of our favorite pizza recipes around here! 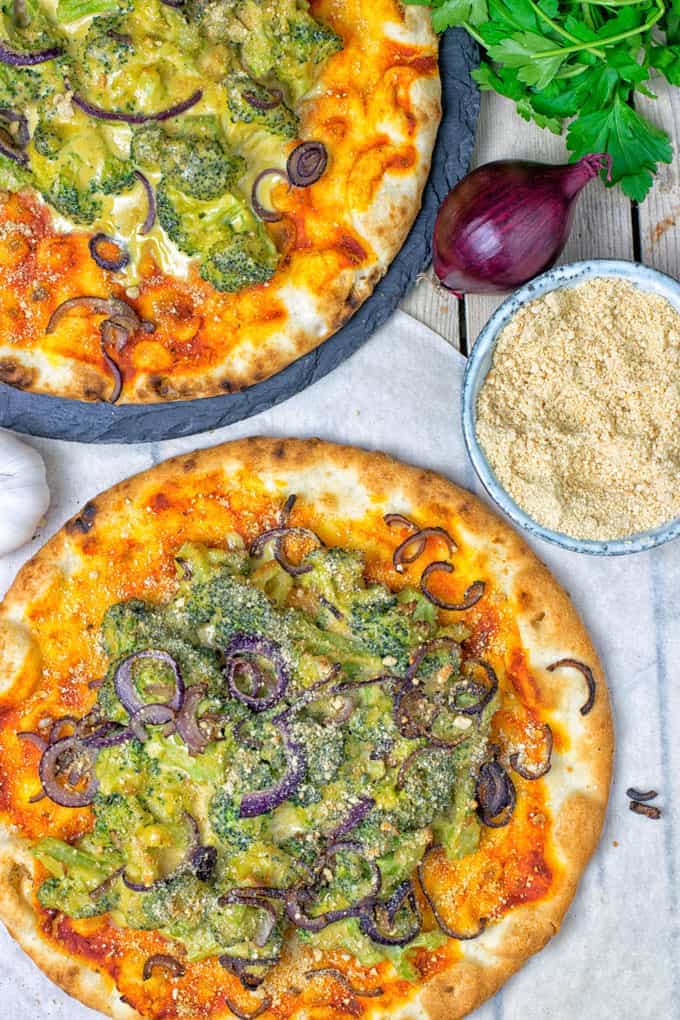 This vegan broccoli cheese pizza by Florian from Contentedness Cooking is made from just six ingredients and you only need to follow two easy steps. And it’s super filling and satisfying! 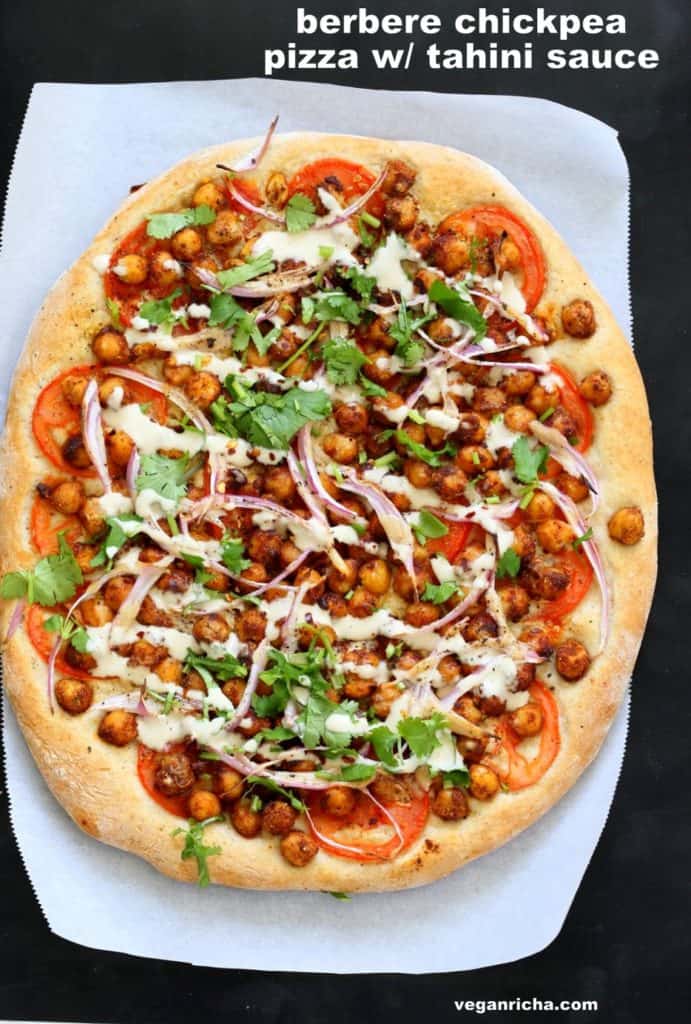 This vegan Ethiopian Berbere chickpea pizza by Richa from Vegan Richa is packed with flavor! Richa topped it off with tahini garlic dressing. But it’s also great with vegan ranch, or other creamy dressing. 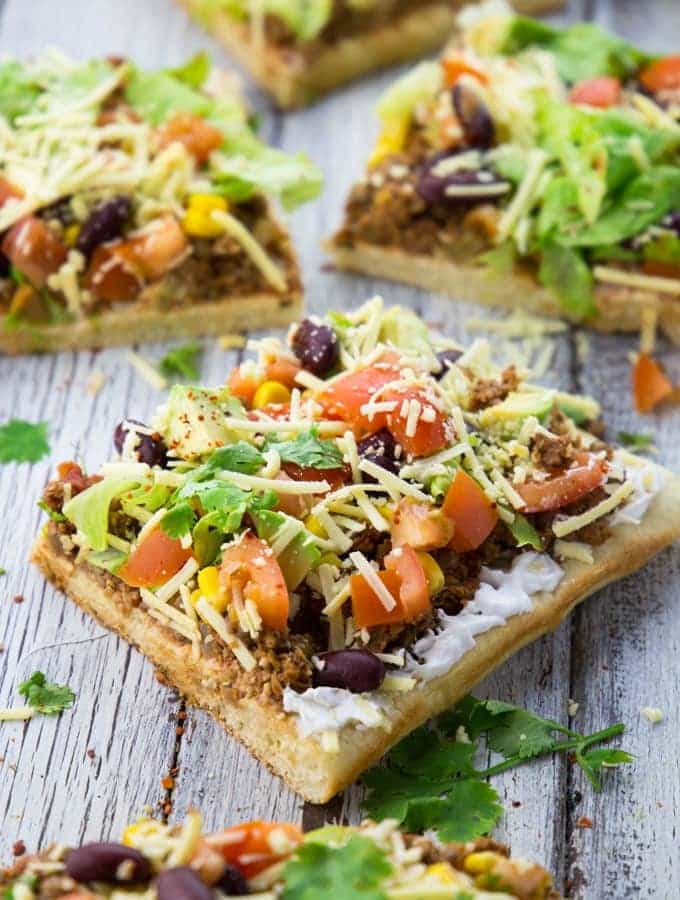 I can’t get enough of lentil walnut meat. I’ve already used it for vegan tacos and a vegan taco salad. It’s just soooo good!! I now took my vegan walnut meat to the next level and made a vegan taco pizza with it. And boy was it yummy! If you can’t decide between tacos and pizza, this is the recipe for you!! 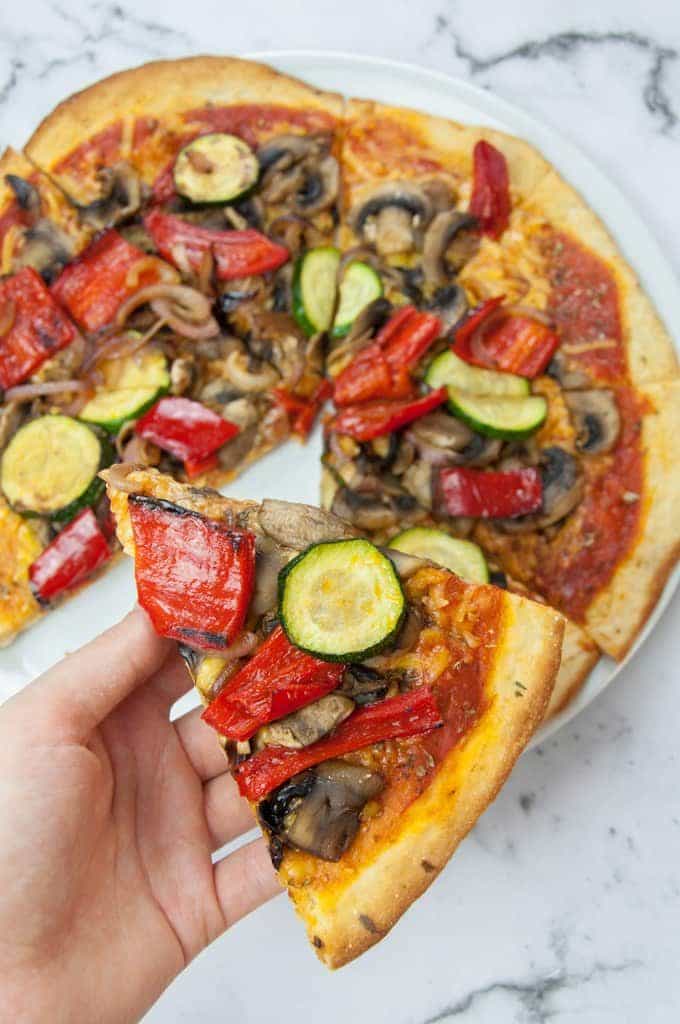 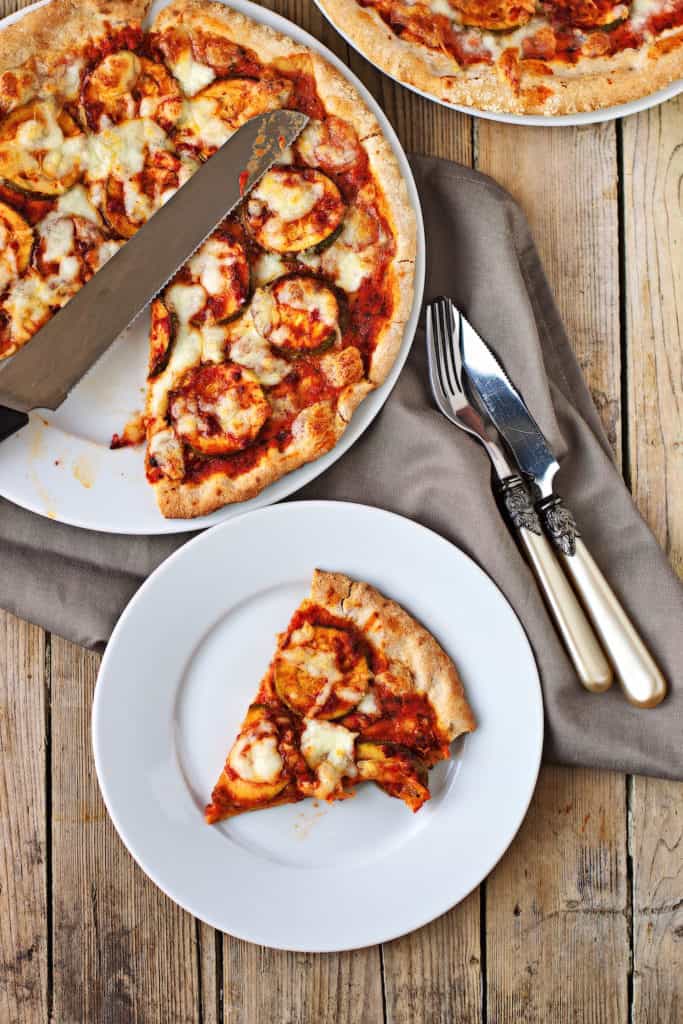 Doesn’t this vegan pepperoni pizza by Florian from Contentedness Cooking look super delicious? I mean just look at it! Instead of pepperoni slices he used marinated and baked zucchini. Doesn’t that sound cool? 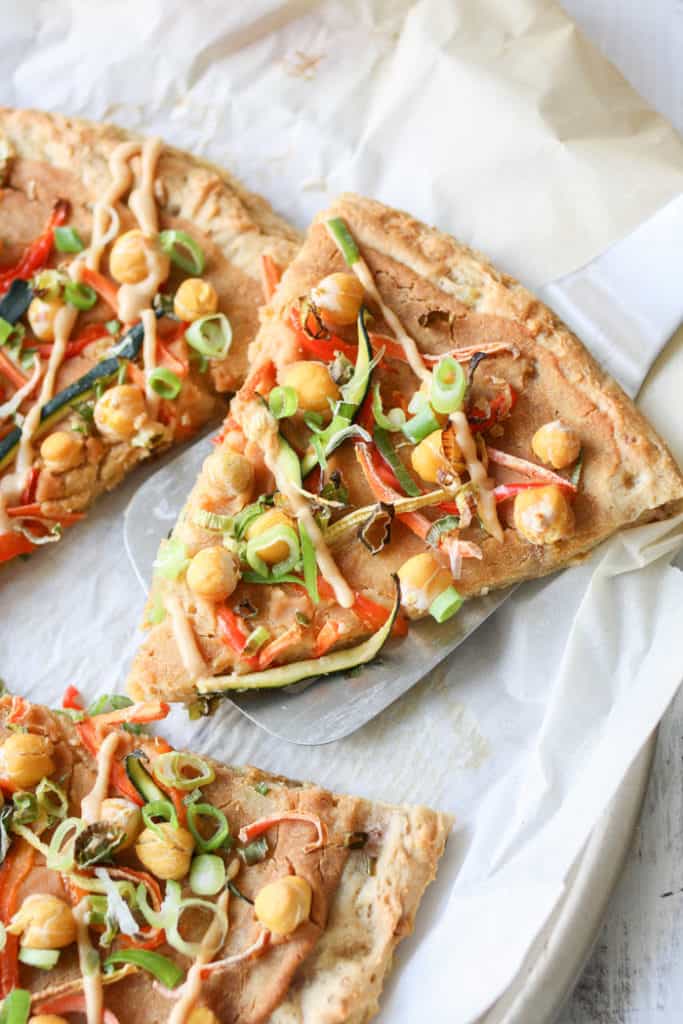 If you’re looking for an exotic pizza, then try this Thai pizza by Sophia from Veggies Don’t Bite. It’s topped with carrots, zucchini, bell peppers, and chickpeas and smothered in a light and creamy peanut sauce. So yummy! 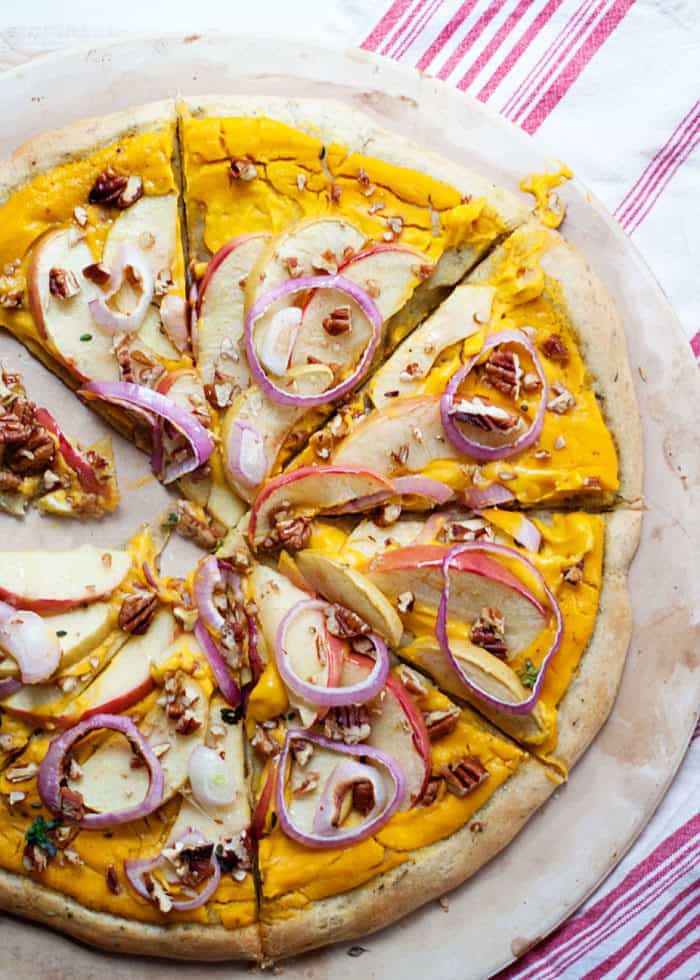 Butternut squash makes a silky-smooth and full-flavored pizza sauce. Kare from Kitchen Treaty used it as the perfectly creamy base for this fall-inspired pizza with apples and pecans. 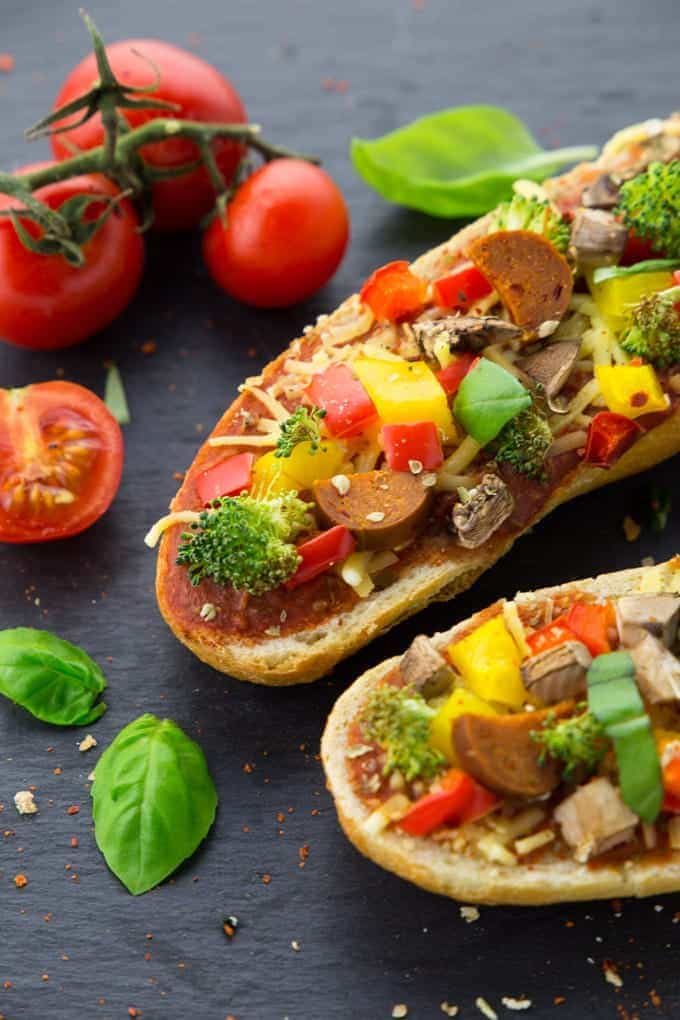 This vegan French bread pizza is incredibly delicious, crunchy, and ready in only 15 minutes! I topped it with bell pepper, broccoli, and small vegan pepperoni slices. Perfect for quick weeknight dinners! And also super kid-friendly! 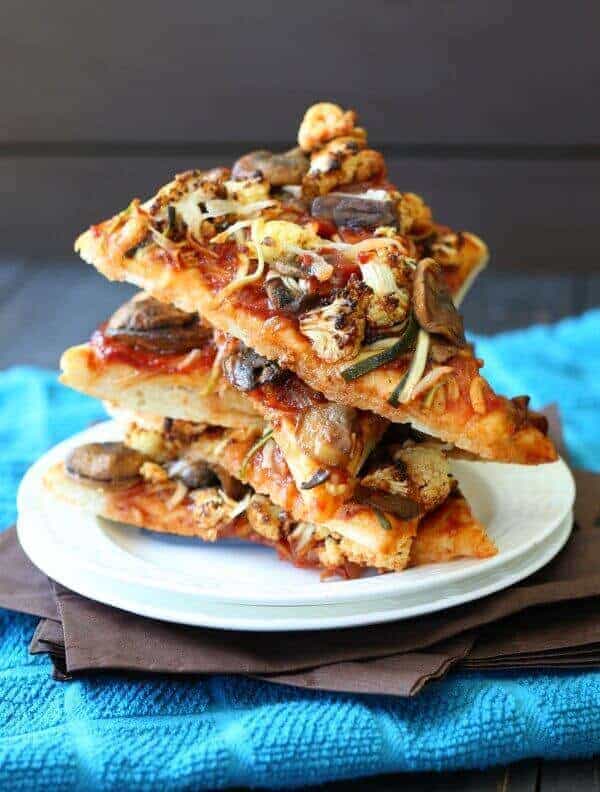 BBQ sauce and pizza always is a great combination. This BBQ veggie pizza by Ginny from Vegan In The Freezer is the perfect proof! Ginny topped it with BBQ sauce, portobello mushrooms, zucchini, and cauliflower. 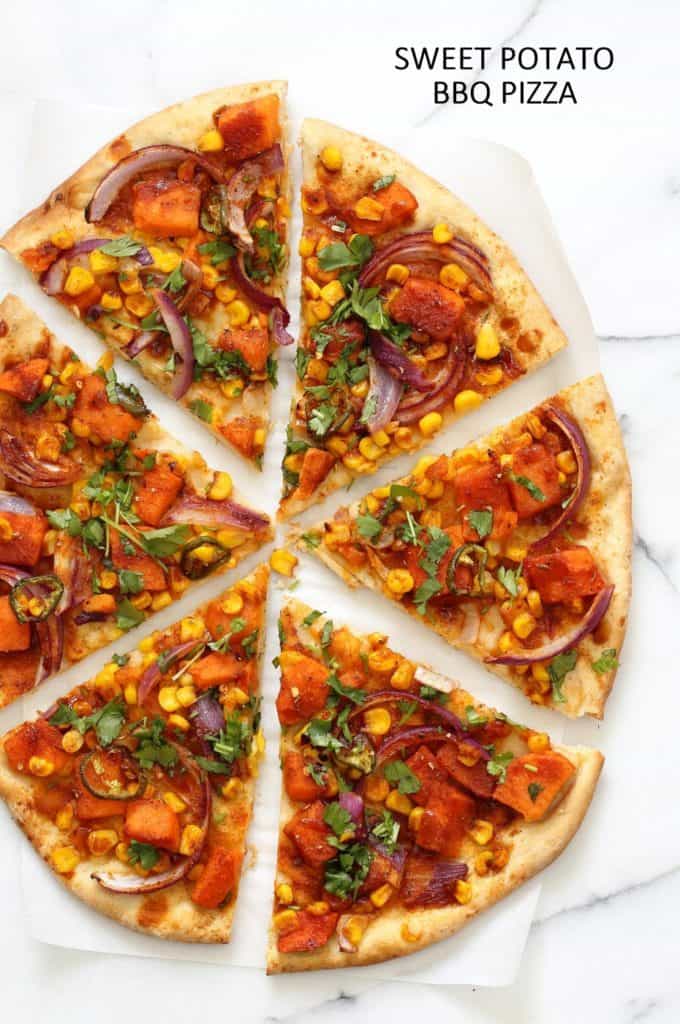 This easy summer pizza by Richa from Vegan Richa is tossed in homemade BBQ seasoning and dressed in BBQ sauce. Richa topped it with sweet potato, corn, and jalapeño. 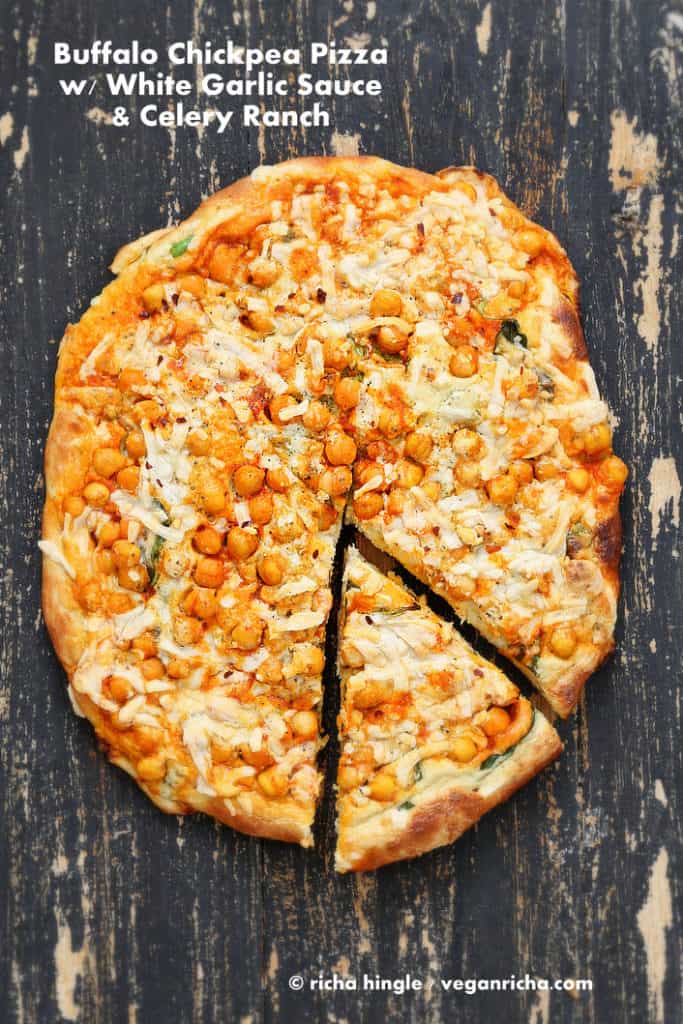 This vegan Buffalo chickpea pizza with white garlic sauce and celery ranch dressing  by Richa from Vegan Richa takes just minutes to put together. It’s so easy to make and packed with flavor! And it’s soy-free and gluten-free. 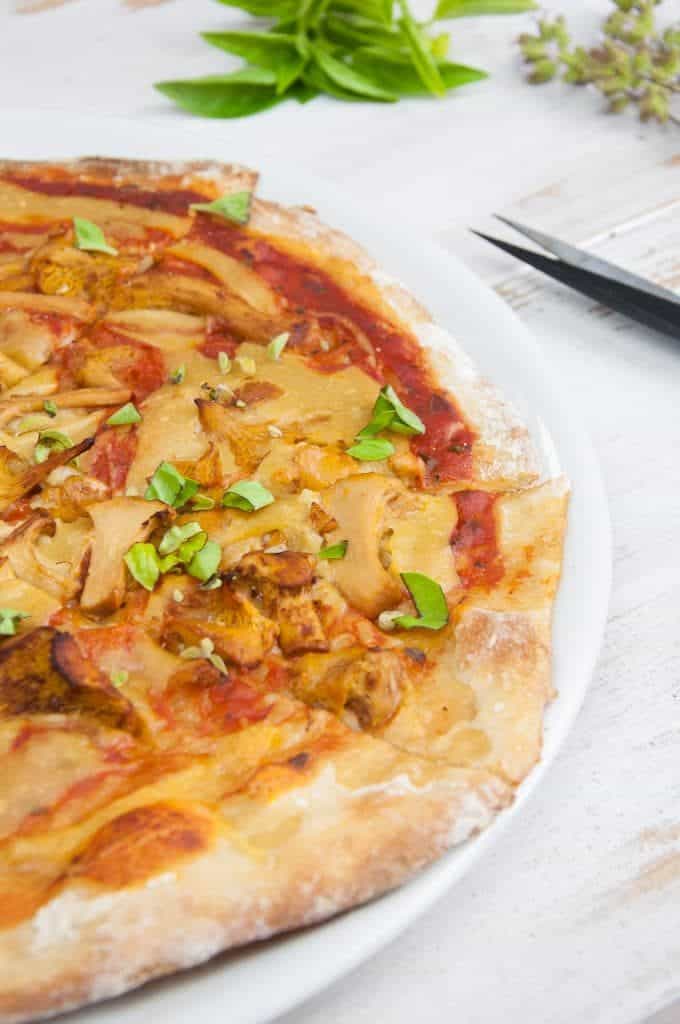 If you’re looking for an easy vegan pizza, try this super creamy vegan Chanterelle Pizza by Bianca from Elephantastic Vegan. Bianca used homemade vegan cheese sauce and a crust made from scratch! 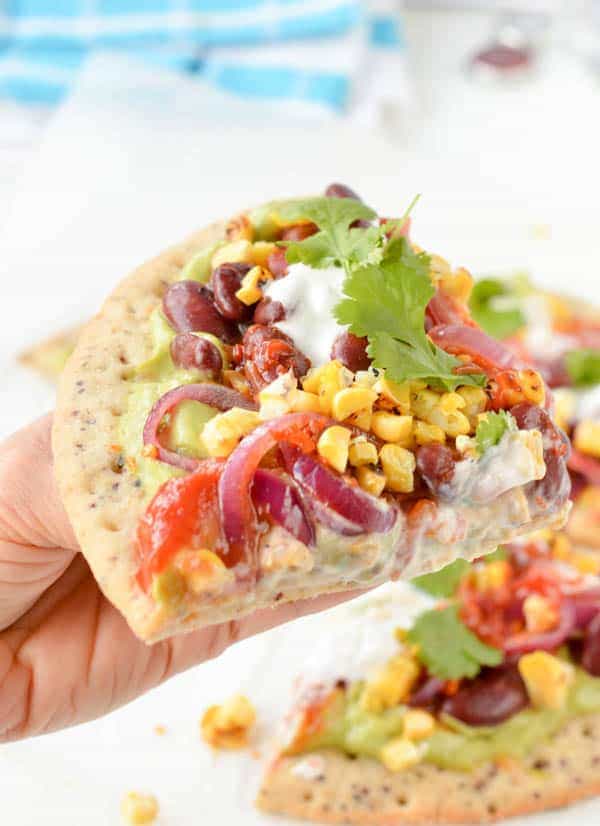 This healthy vegan avocado pizza by Carine from Sweet As Honey is ready in less than 15 minutes. Carine used a thin sprouted pizza base and topped it with fried black beans, red onions, grilled corn, salsa sauce, and coconut yogurt.

My vegan pizza dough is super easy to make and really crispy.  I make it all the time.

Probably you’ve got all of the ingredients for this easy pizza dough at home. 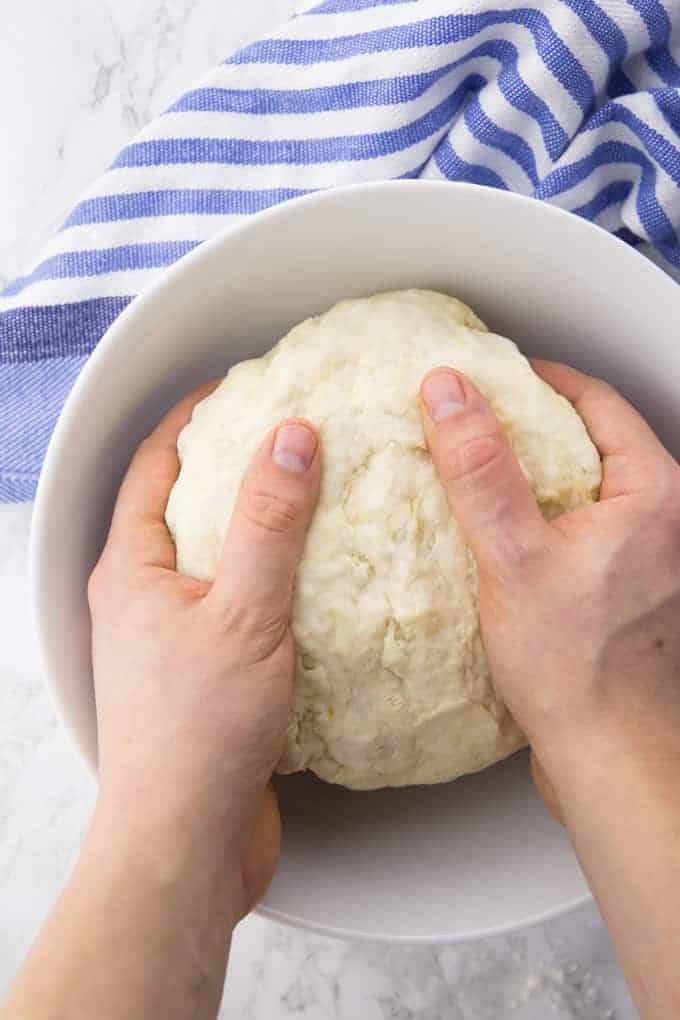 If you’re looking for a yeast-free pizza dough, check out Bianca’s recipe.

What are the best vegan pizza toppings?

As you can see in this roundup, there are soooo many delicious vegan pizza toppings. You can be super creative!

My favorite vegan pizza toppings are: