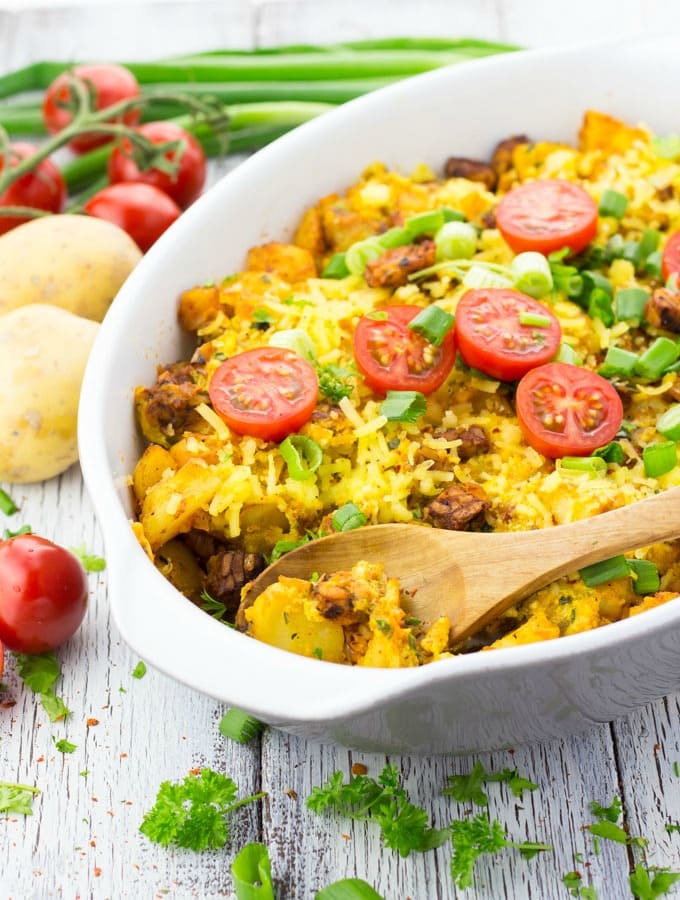 I must admit I’m actually not a big breakfast person. Usually I’m totally happy with my daily green smoothie (with loooots of spinach or kale). But once in a while I feel like having a hearty breakfast or even brunch. Last Sunday, we had this vegetarian breakfast casserole with potatoes, BBQ tempeh, and vegan cheese and boy, was it good!! I made it for a family brunch and everybody was totally surprised that it was vegan! 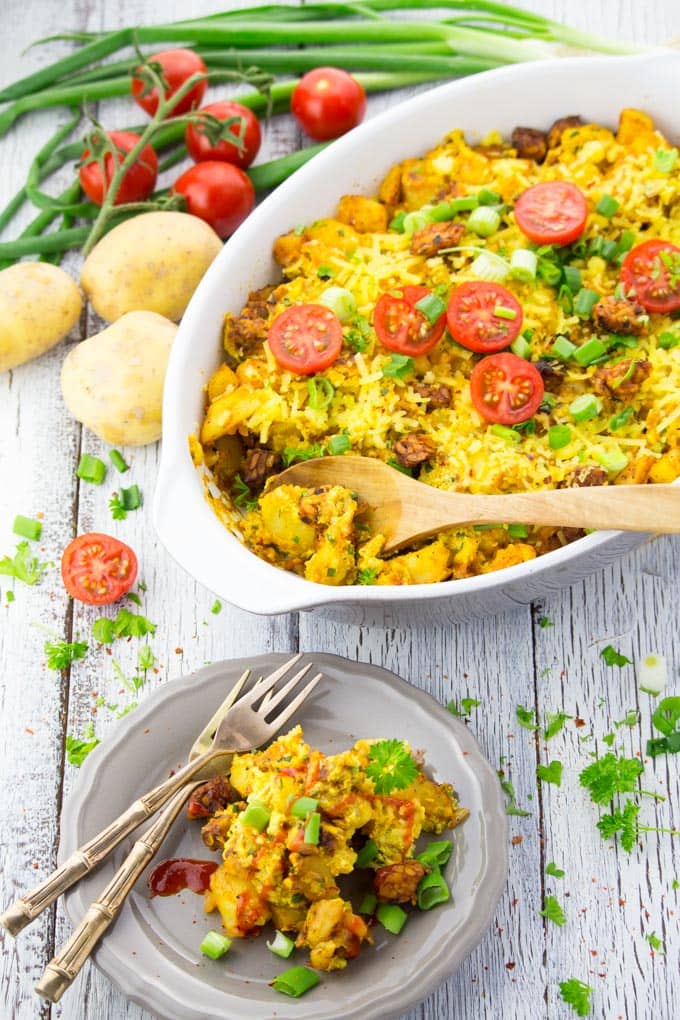 I remember I once had a vegetarian breakfast casserole with hash browns and wanted to make something similar for the brunch we had last weekend. The casserole I remember was loaded with cheese and eggs, so it wasn’t exactly vegan. But no problem, we vegans are creative, right? So of course I had to try to veganize it. Instead of the eggs, I used a mixture of silken tofu, turmeric, paprika powder, and chives. I also stirred and some vegan cheese and added a pinch of kala namak, which gives it its egg-like taste. 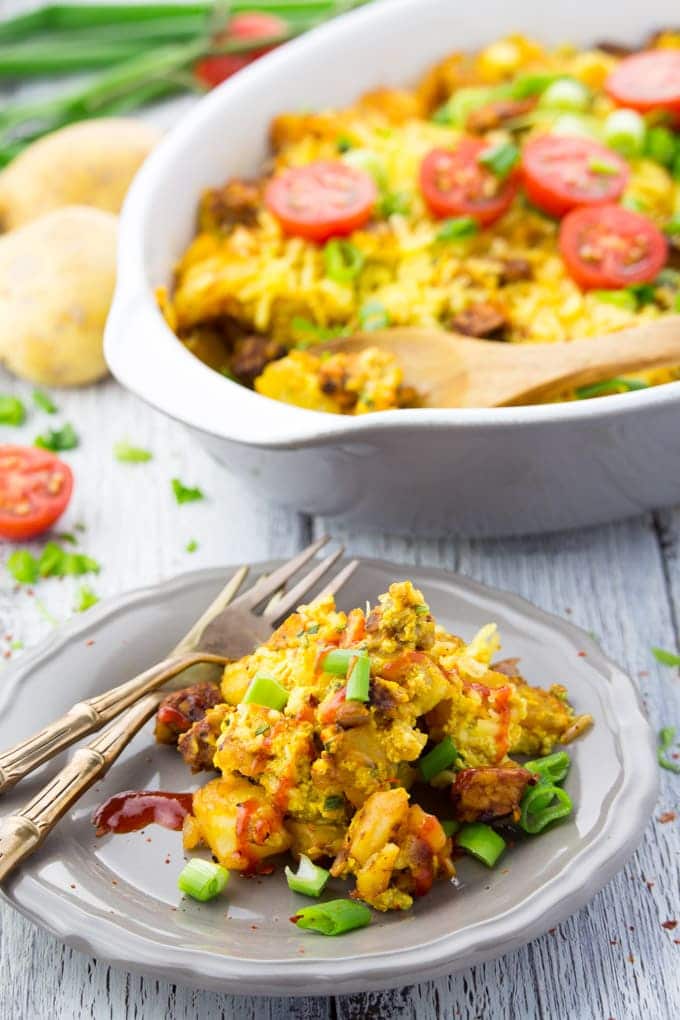 If you haven’t heard of kala namak yet, you should really check it out. It’s a type of rock salt that is typically used in South Asia. Some people call it Himalayan Black Salt and it smells and tastes very much like eggs. I also added it to the vegan asparagus quiche I made a couple of weeks ago and it’s also great with avocado. If you’re looking for even more recipes that use kala namak, check out this article that features tons of delicious vegan egg recipes. 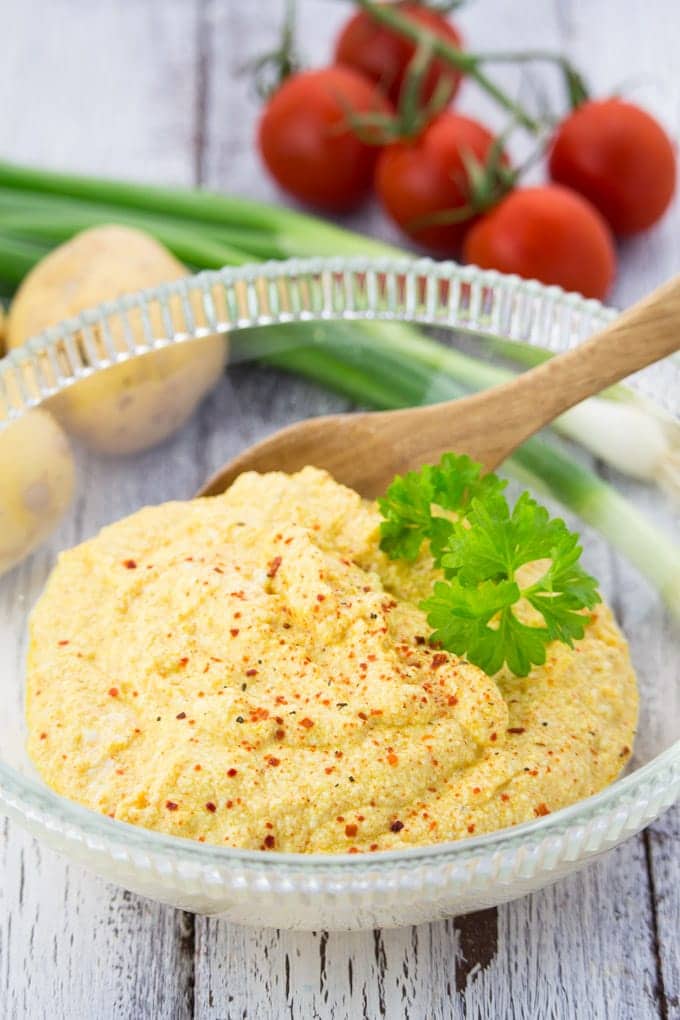 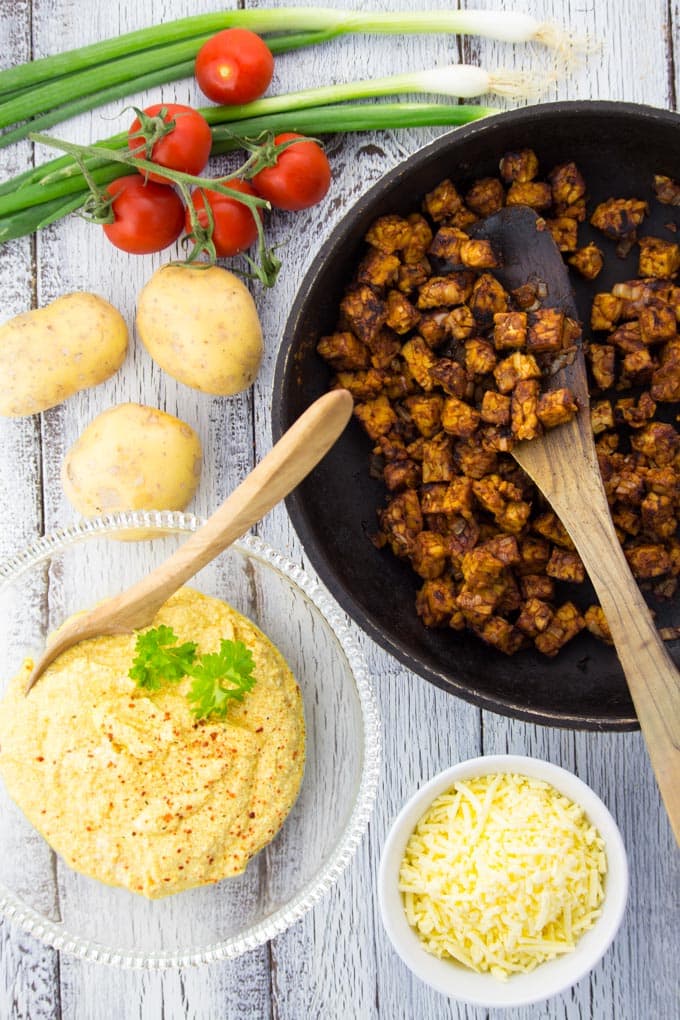 For me, the best part of this vegan breakfast casserole is the BBQ tempeh. We make it quite often as a topping for salads or pasta and it’s super easy to make! When I first tried tempeh some years ago, I didn’t really like it and I thought it was kinda boring and tasteless. But when you season it right and cook it until it’s really crispy it’s soooo good!! I like it even better than tofu and I really LOVE tofu, so that’s actually more than a compliment! I also used this kind of tempeh bacon for my spaghetti carbonara, which has been really popular on the blog. 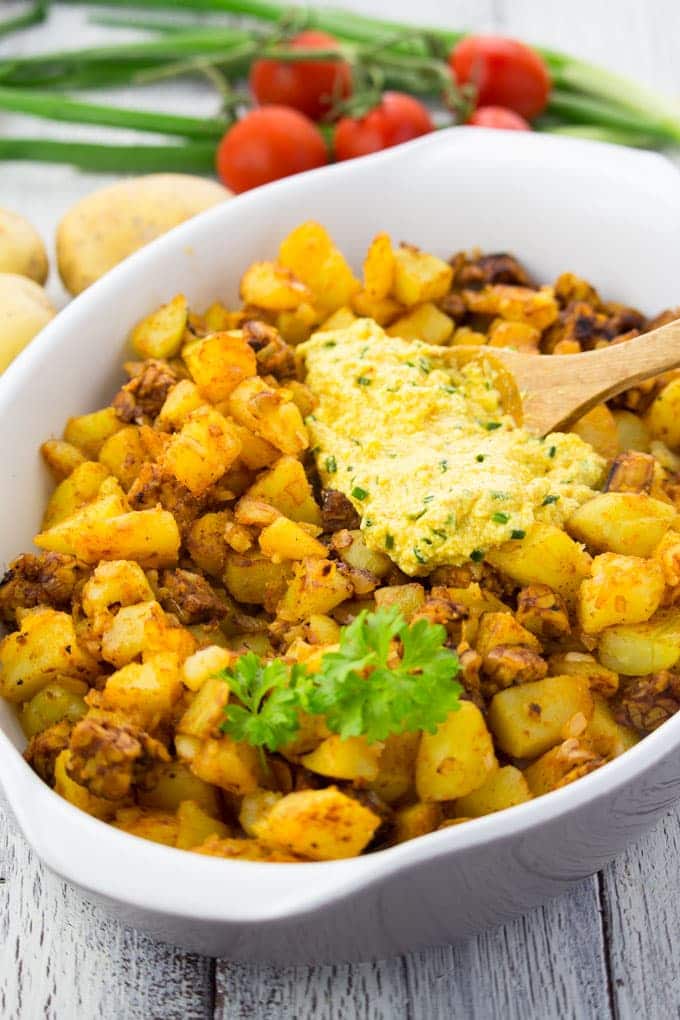 Unlike most of my other recipes, this vegetarian breakfast casserole takes a bit longer to make, but it’s so worth the time! And it’s actually really easy to make, it just takes a bit longer because you have some waiting time while it’s in the oven.

I first boiled the potatoes and cut them into small cubes and seasoned them with some onions, paprika powder, and salt and pepper. Make sure to cook them until they are really crispy and lightly brown. 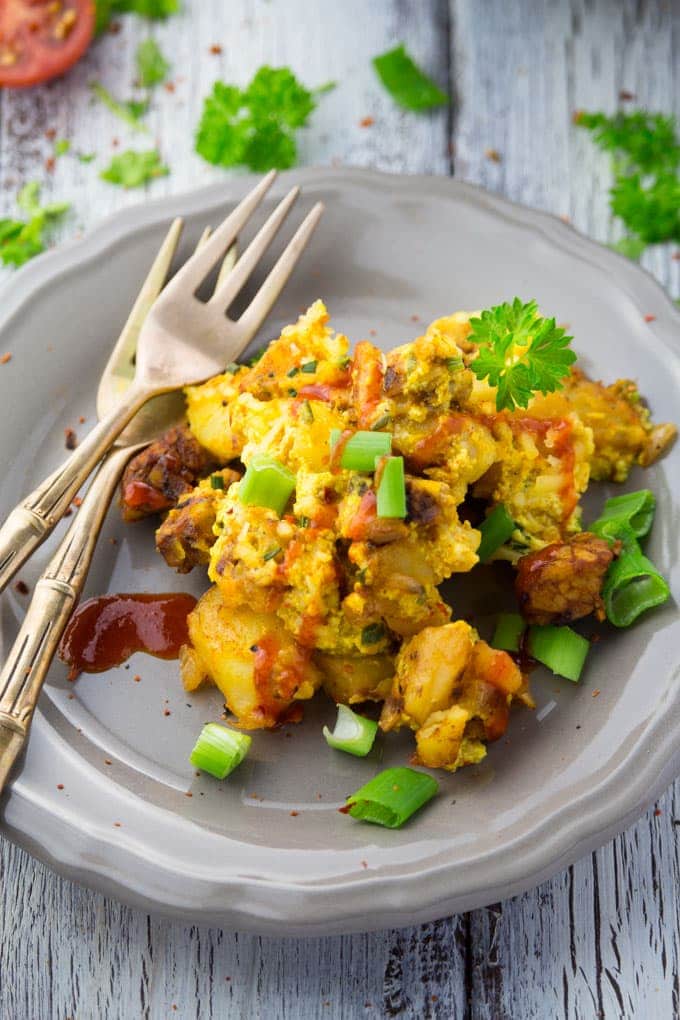 If you want it to be a lot faster, you could also use store-bought southern style hash browns instead of the potatoes. Then stir in the vegan egg-cheese mixture, sprinkle it with some more vegan cheese and bake for about 15-20 minutes. I served it with some fresh cherry tomatoes, green onions, and parsley to give it some more color.  Everybody at our brunch really loved it! We topped it off with some sriracha sauce. 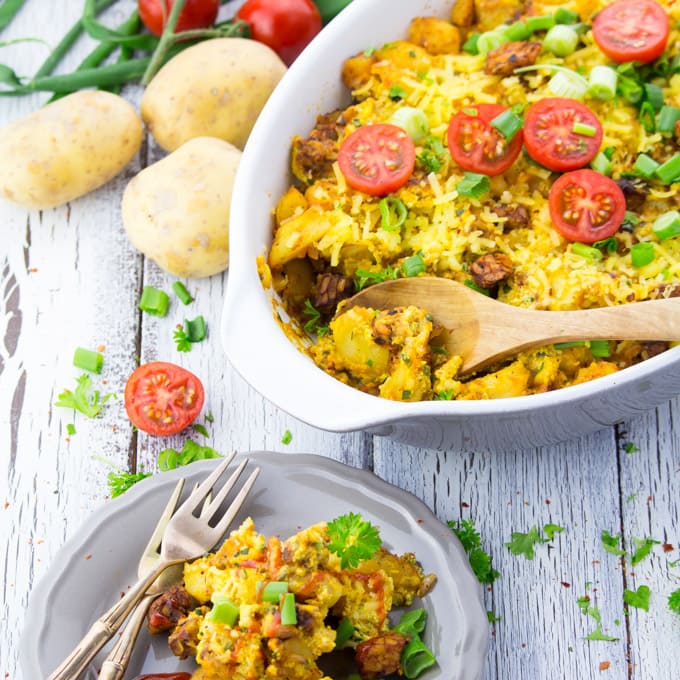 This vegetarian breakfast casserole also makes a great dinner. Just enjoy it with some green salad and you got a delicious and healthy meal!

I hope you like it as much as we do around here! Let me know if you give it a try. As always, I love hearing from you guys!! xx 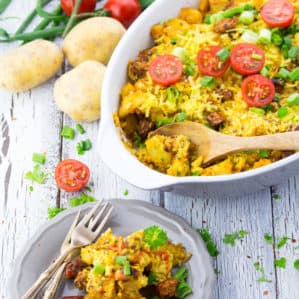