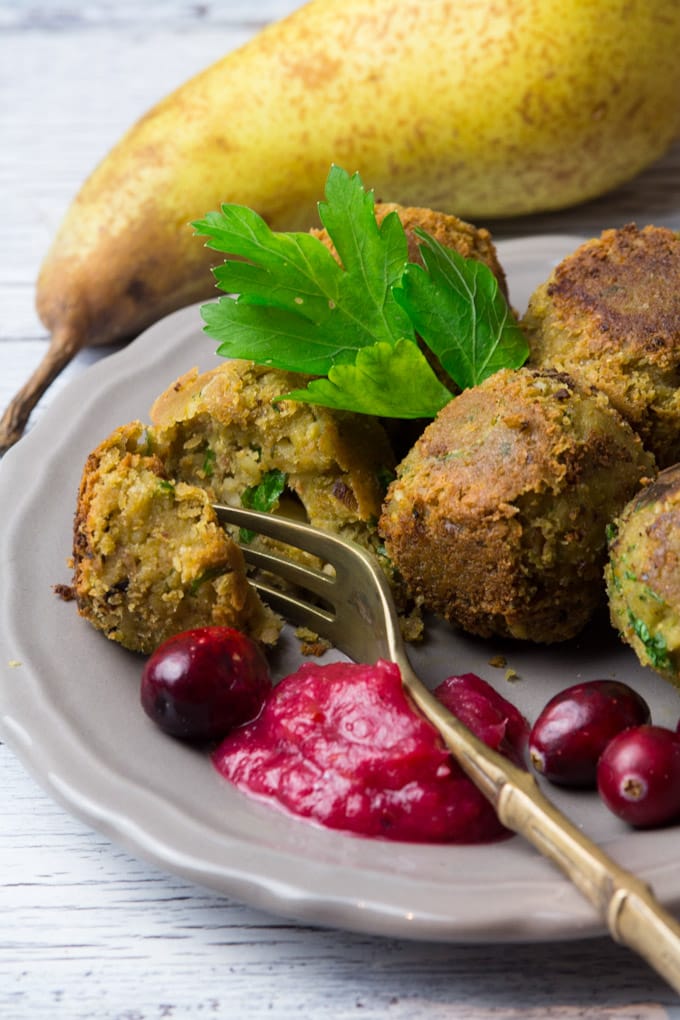 Do you guys already know what food you’re having for Christmas? I got tons of recipes for vegan festive desserts and can’t really decide which one I like best, but probably I’ll go for the gingerbread avocado chocolate mousse because it’s super easy to make. For the main course, we’ll have the lentil walnut loaf with vegan gravy I posted a couple of weeks ago for Thanksgiving. But instead of pumpkin and sweet potato mash, we’ll have it together with mushrooms and pasta. So that’s all covered! But I also wanted to have something little to start with like a vegan appetizer sort of thing. I mean salad is great, but I wanted something else for a change, so I came up with these festive vegan falafel with cranberry pear dip. Who knew falafel could be this festive?! 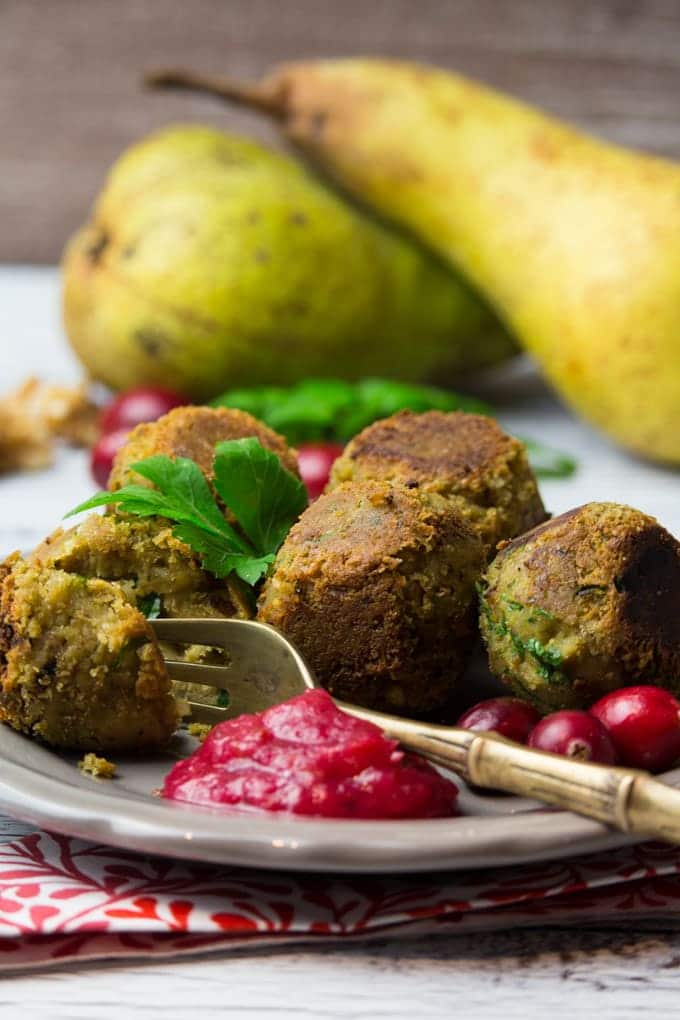 I wanted the falafel to be super quick and easy to make (I mean cooking is awesome, but you don’t want to spend the whole day in the kitchen during the holidays, right?), so this was the first time I used canned chickpeas instead of dried ones. I wasn’t sure if this was working, but they came out pretty good! I also added chopped walnuts, lots of fresh parsley, garlic, cumin, and cilantro. I really love the addition of walnuts in these easy falafel; I think it goes really well with the cranberry dip. 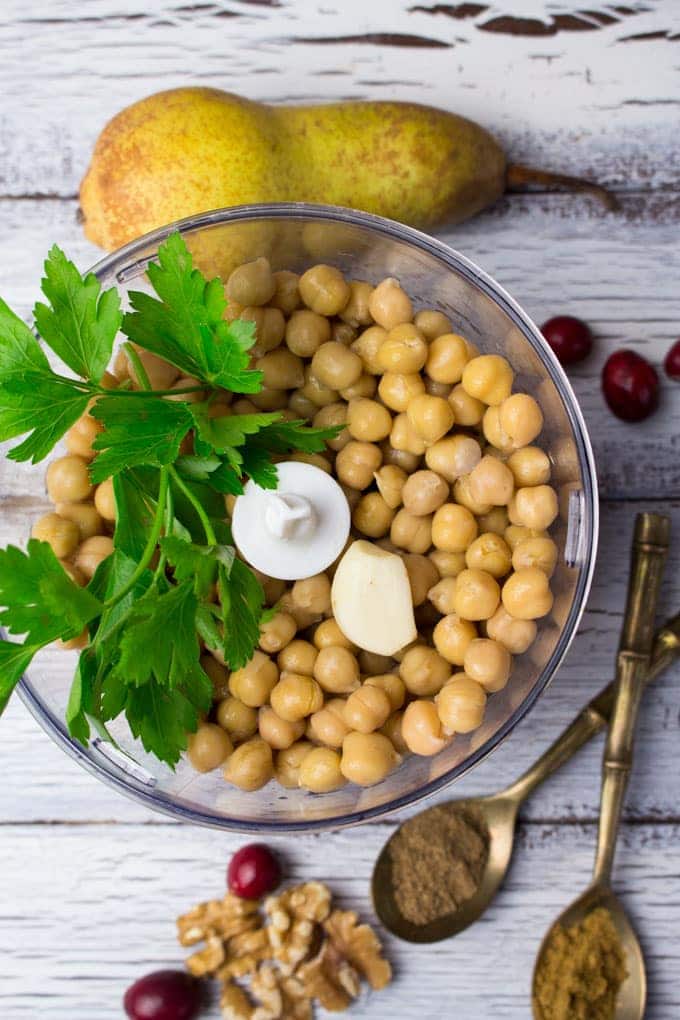 Put all of the ingredients (except the walnuts) into a food processor and blend until smooth. Only use half of the parsley. I wanted to still have some bigger parts of the parsley in the falafel, so I roughly chopped it up with a knife and stirred it in once the falafal mixture was blended. I then also added two tablespoons of spelt flour to make it easier to form little balls. If you don’t have spelt flour, you can also sub it with whole wheat flour. Then just season the falafel mixture with salt and pepper and form little balls. I ended up with about 15 chickpea balls. 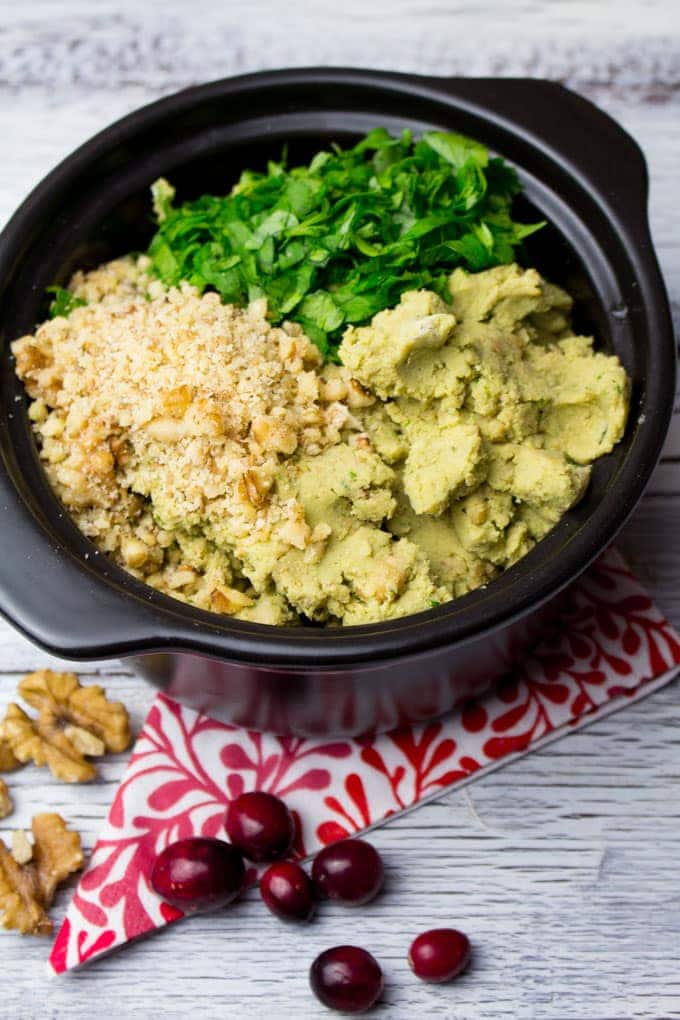 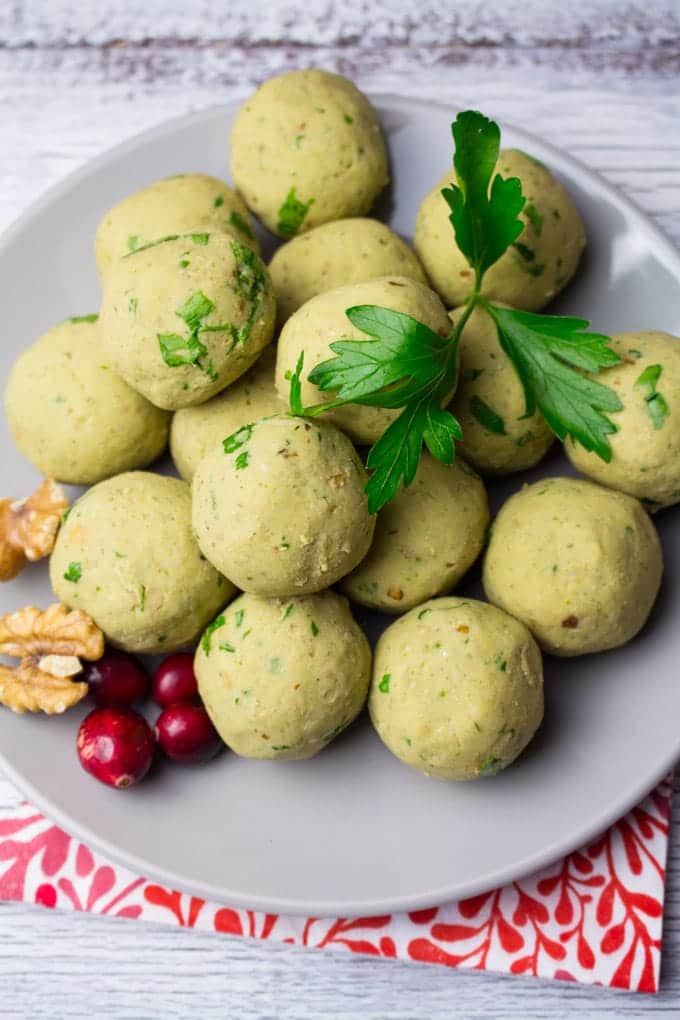 Once they’re rolled, heat some olive oil in a pan and pan-fry them until golden brown. Make sure to use enough oil and flip them over several times, so they don’t get burned. They’re supposed to be a bit crunchy on the outside. 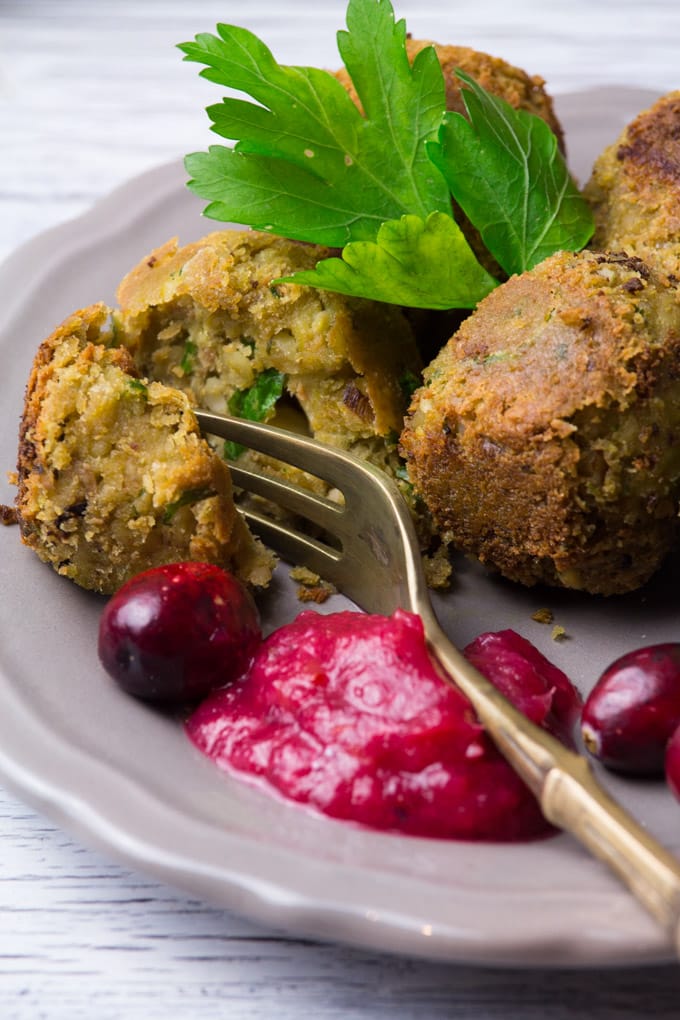 For the cranberry pear dip, cut the pears into medium-sized cubes. Put them into a small sauce pan together with the cranberries.

Add some water and brown sugar and cook for about 15 minutes until the cranberries are popped and the pears are soft.  Instead of the brown sugar you can also use coconut sugar if you want. The sauce is supposed to thicken to a jam-like consistency. Once it’s cooked, put the mixture into a food processor and blend until smooth. 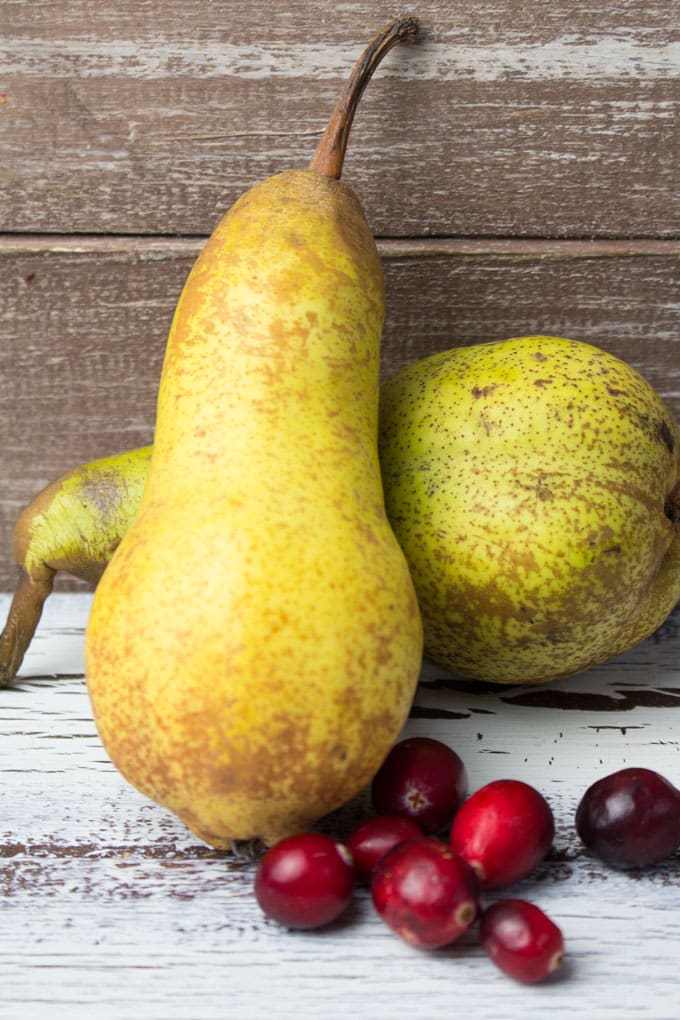 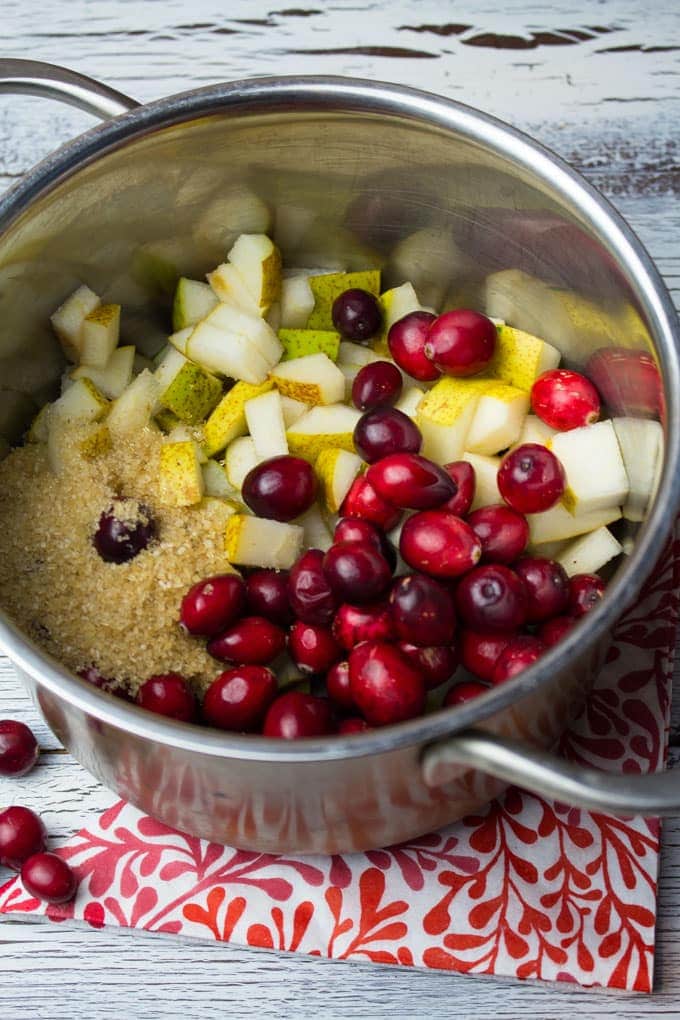 Serve the falafel together with the cranberry pear dip and you got a great and easy vegan appetizer for the holidays. If you got some leftovers, the falafel are also great in a pita with some lettuce, cucumber, tomatoes, and yogurt sauce. 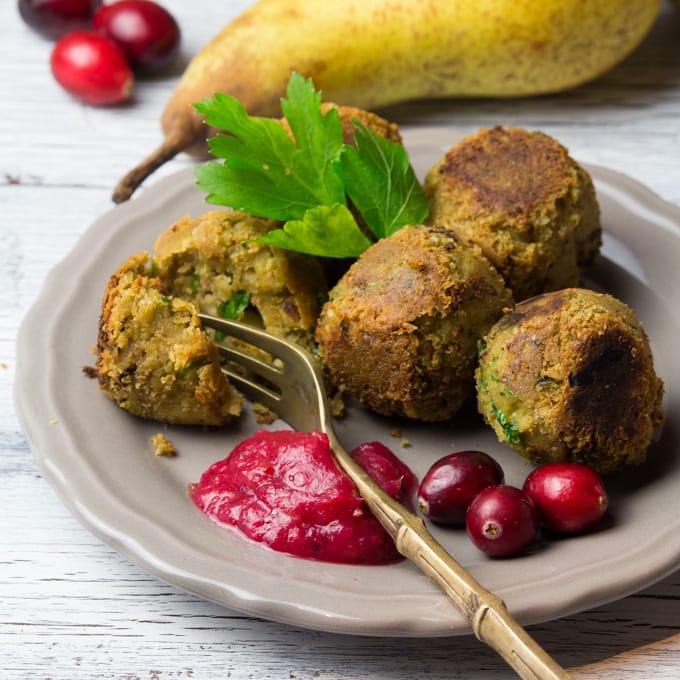 I hope you all have some great and relaxed days with your loved ones! Oh, and let’s not forget about all the yummy food we’re all gonna have!  :-) 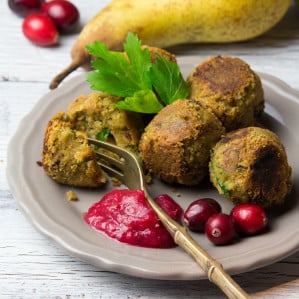 For the cranberry pear dip:

Tried this recipe?Mention @_veganheaven_ or tag #veganheaven!
Rate the recipe!If you like this recipe, please leave a good rating! This will help other readers.
Previous Post: « Vegan Potato Kale Soup
Next Post: Vegan One Pot Spaghetti with Vegetables »