You won’t believe how delicious these vegan ribs are! They’re tender, meaty, and just in time for your next vegan BBQ! Serve them with crispy wedges and vegan ranch dressing and you will even impress meat-eaters! 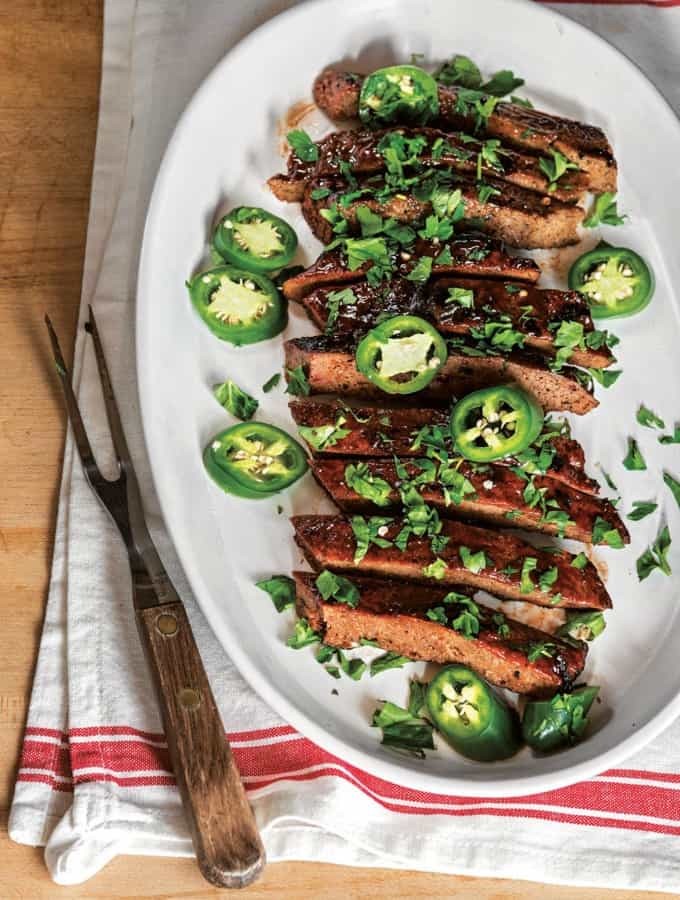 I’m so happy that it’s finally getting warmer! I’m so ready for summer and I can’t wait to turn on the grill and have delicious dinners outside. Yay! Linda’s and Alex’ cookbook came just in time for that. I was so excited and absolutely fell in love with it. So many delicious vegan recipes in just one place!

It was hard to pick a recipe from the book to share with you guys. But I had never tried vegan ribs or seitan ribs before, so I was kind of curious. And they turned out sooo good!

First a few words on these vegan ribs and then I’ll take you on a little tour through Linda’s and Alex’ cookbook! 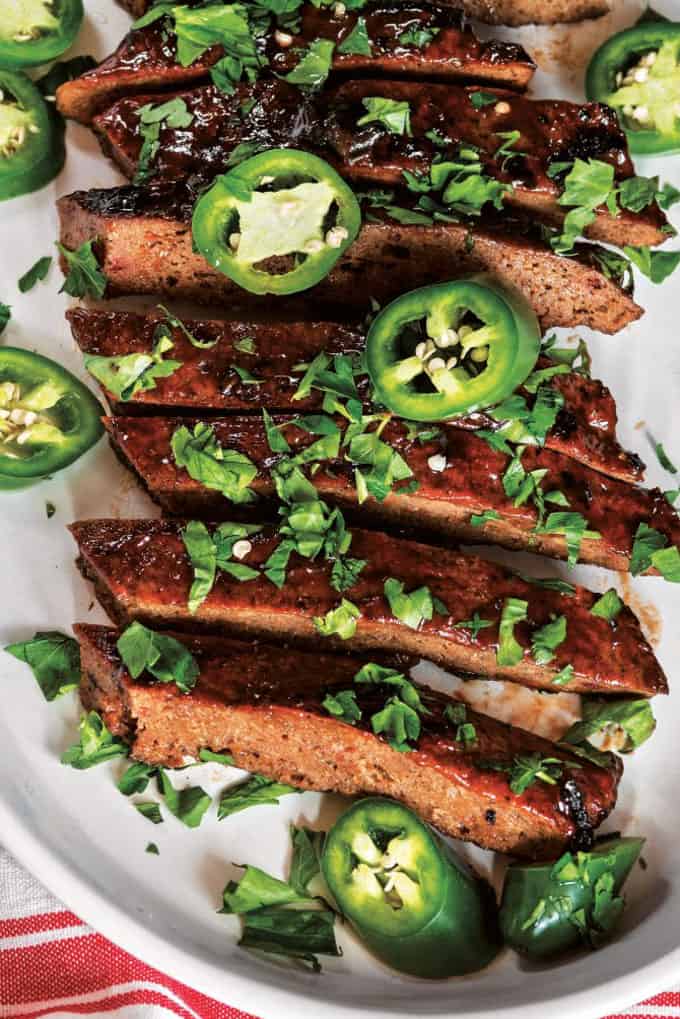 What to Love About These Vegan Ribs:

These vegan ribs are great with crispy wedges! Or you could also enjoy it with my  Southwestern pasta salad. If you’re looking for more vegan grilling recipes, check out the roundup of 30 vegan BBQ and grilling recipes.

What You Need For These Vegan Ribs: 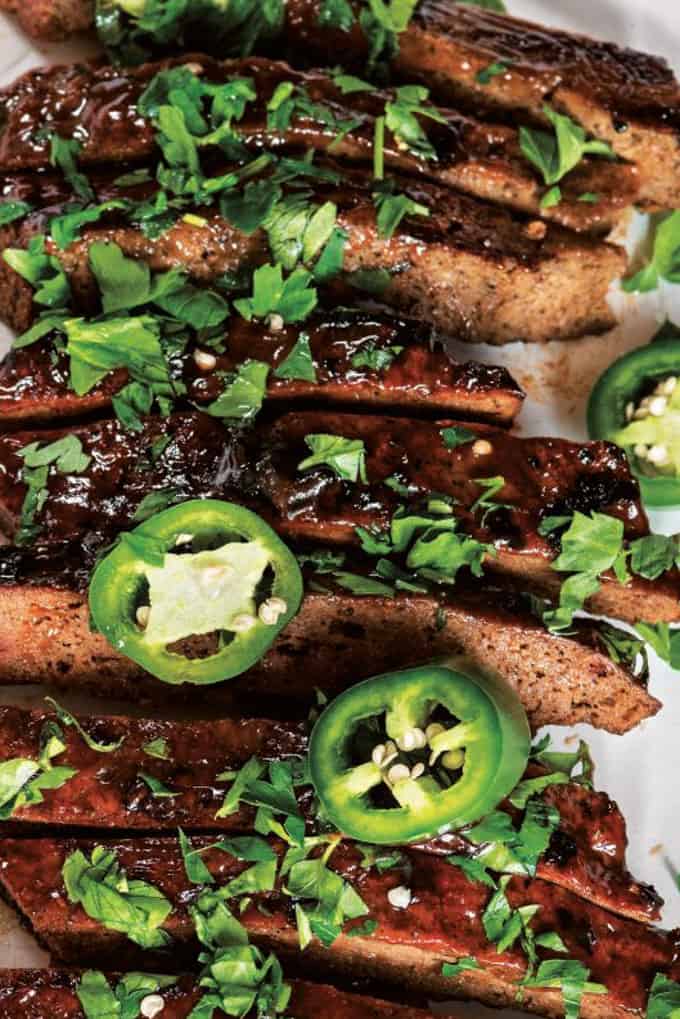 How to Make Vegan Ribs

Linda and Alex use seitan for these vegan ribs, which gives them an amazing texture! For those of you who are not familiar with seitan: It’s often used as a meat substitute as it has a very chewy and stringy texture that resembles meat. Besides, it’s also a great vegan source of protein. Maybe you wouldn’t guess but seitan is made from wheat gluten.

It’s made by rinsing wheat flour dough with water to dissolve the starch granules. In the end, you’re left with a sticky mass of protein, which you can then cook and use to make homemade vegan meat alternatives. 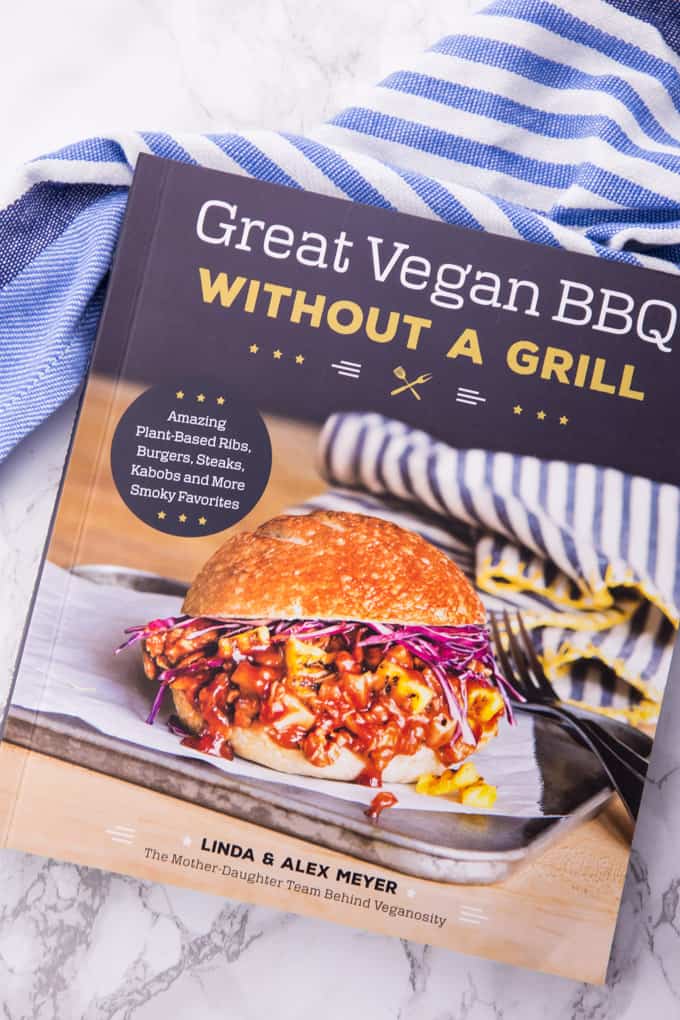 You can also use vital wheat gluten like Alex and Linda did for their vegan ribs. It’s just perfect for vegan meaty recipes! You can purchase it online or at Whole Foods or in the natural foods section of many supermarkets. It’s becoming more and more common these days.

To make these vegan ribs, you combine all of the dry ingredients in a bowl (meaning the vital wheat gluten and the spices). Then put all wet ingredients in a food processor and blend until smooth and creamy. Pour it into the dry mixture and stir until it turns into a stretchy ball of dough. Pat the dough flat and bake for 30 minutes. You will find the detailed recipe instructions for the vegan BBQ ribs in a separate, printable recipe box at the end of this post. 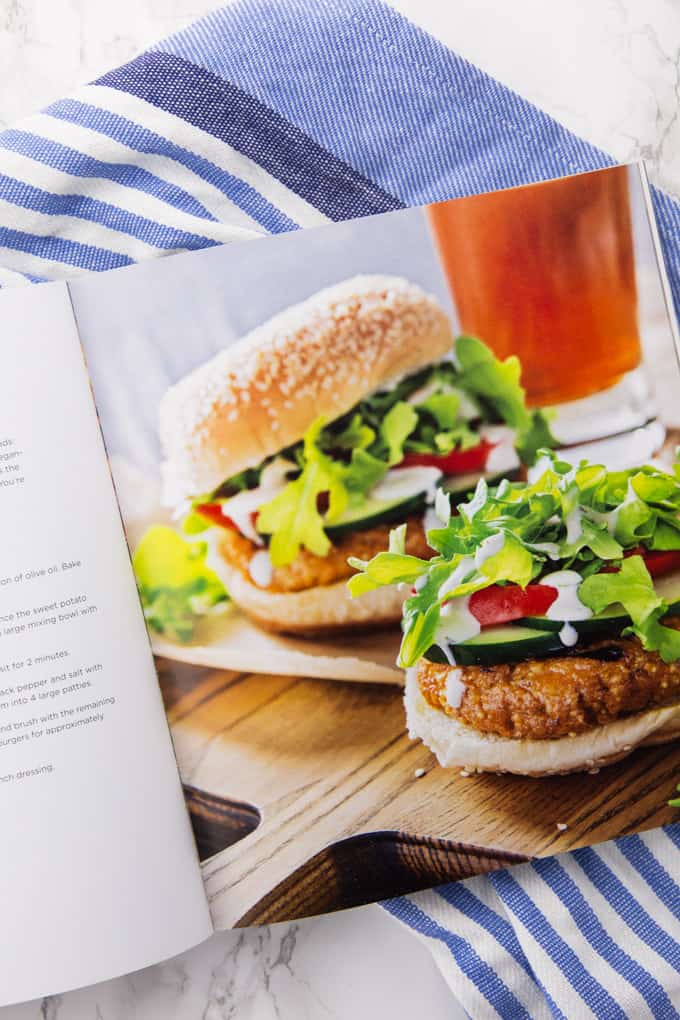 “Great Vegan BBQ Without A Grill” by Linda and Alex Meyer

Linda and Alex are the mother-daughter team behind Veganosity. I’ve known Linda for a couple of years as we’re both part of a Facebook group for vegan bloggers, where we help each other out with blogging stuff. I was so excited when Linda told us that she and Alex got a cookbook deal. I love their recipes and a book about vegan BBQ recipes? Totally call me in! And you don’t even need a grill to make them? Even better!

The book is full of amazing vegan ribs, burgers, steaks, kabobs, and so many more smoky vegan recipes! 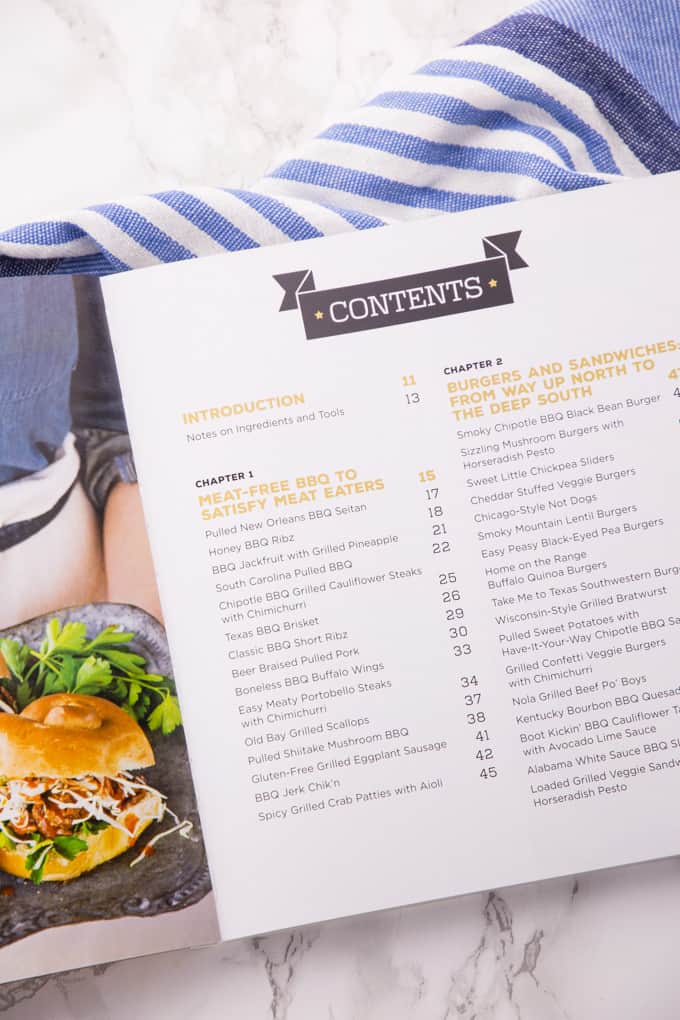 Linda and Alex take drool-worthy photos themselves (just check out their blog!), but they decided to work with a professional team of food photographers and stylists for this cookbook. And the outcome is AMAZING! I just wanna try all of these recipes and also my hubby couldn’t believe his eyes…

The book is divided into seven chapters:

At the beginning of the cookbook you can also find some helpful notes on ingredients and tools. They’re talking about jackfruit, vital wheat gluten, aquafaba, liquid smoke, and nutritional yeast in this section. So even if you’re not familiar with these products, you’ll learn everything you need to know to make these delicious vegan grilling recipes. 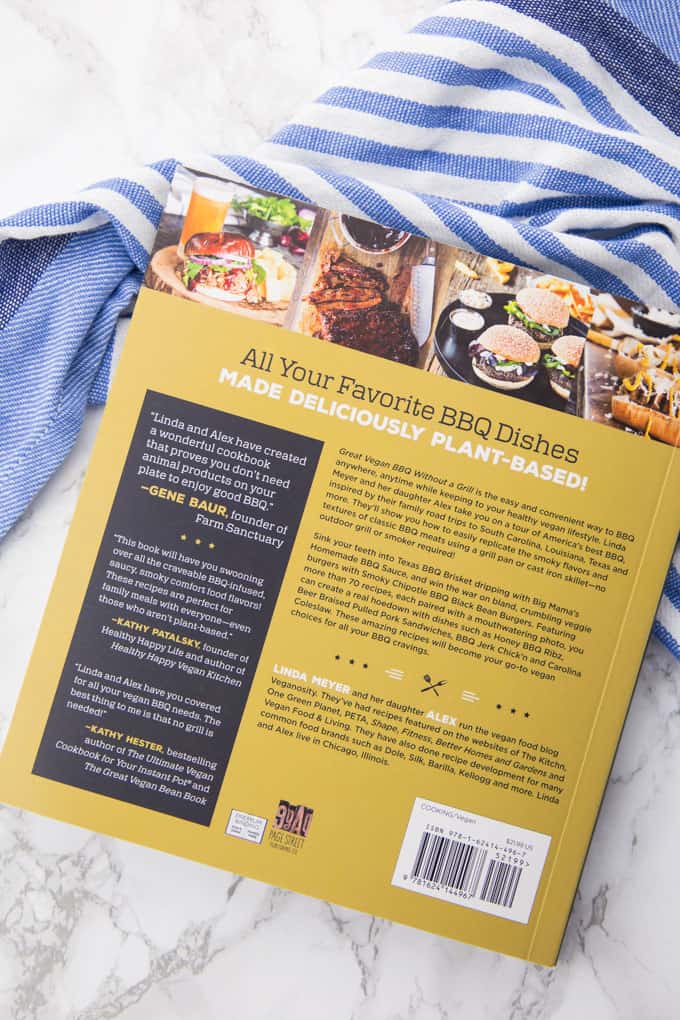 They’re also giving you tips on what pans to you use. Can you believe that you don’t even need to step outside to make these vegan BBQ recipes?! However, if you want to use an outdoor grill, you certainly can! The recipes will still work just fine.

I could definitely recommend “Great Vegan BBQ Without A Grill” to everyone who loves smoky flavors! It will be the perfect help for delicious family meals, even for meat-eaters in the family! 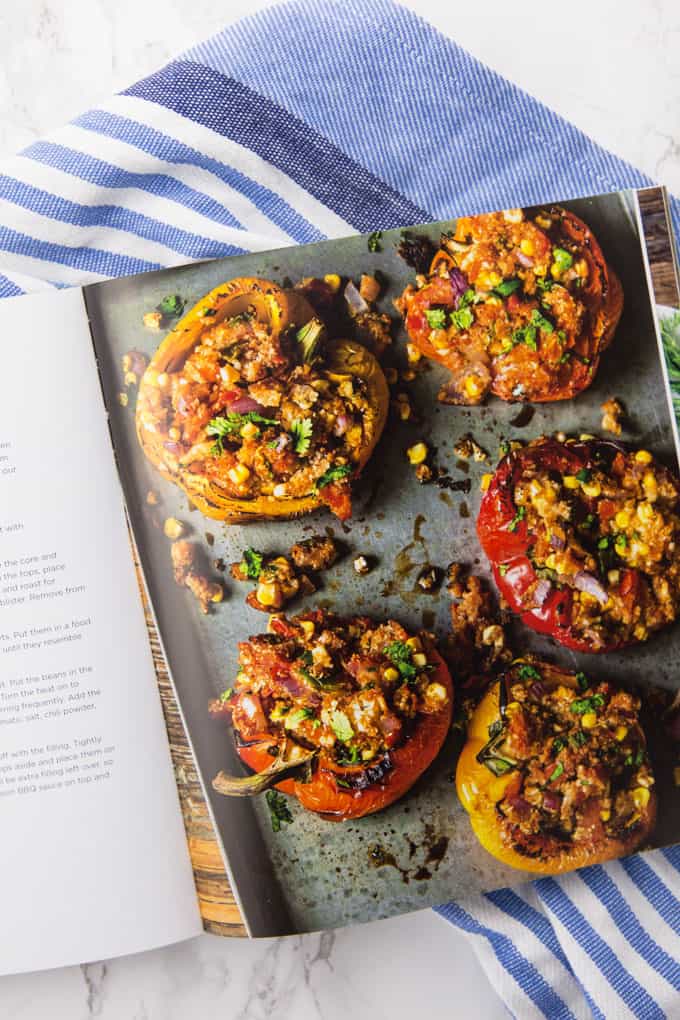 My Experience with “Great Vegan BBQ Without A Grill”

I’ve already made the vegan ribs, a vegan crab dip with jackfruit, and BBQ cauliflower stuffed peppers. Everything turned out super delicious and the recipes are very easy to follow. You might have to invest in a few new ingredients and spices (for example vital wheat gluten and liquid smoke) but if you like smoky and meaty vegan recipes, it’s really worth it! 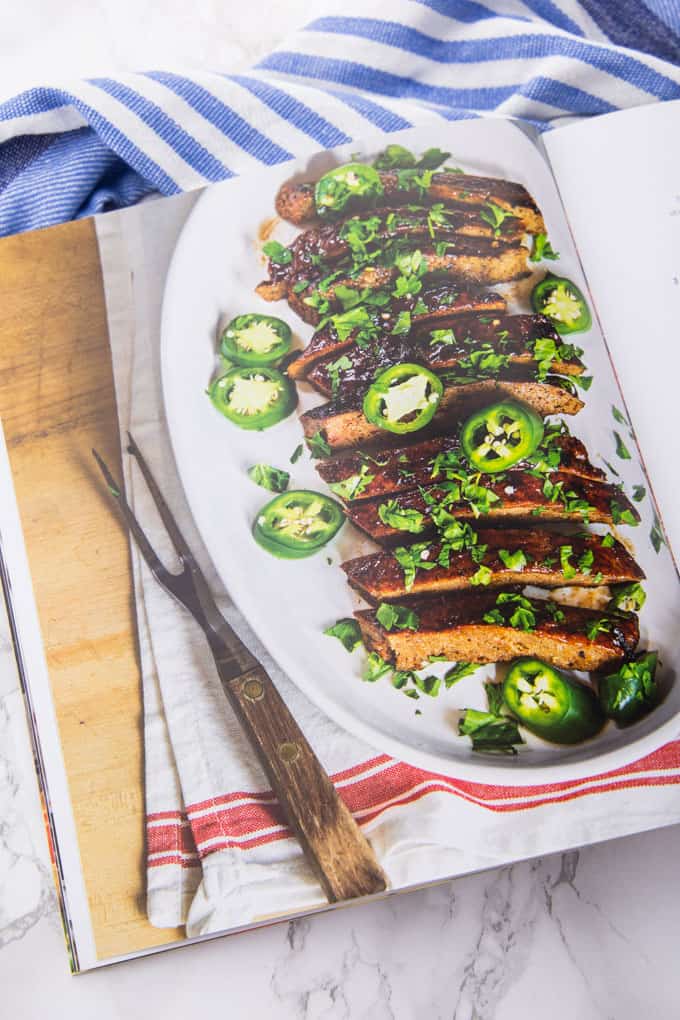 Here are a few recipes from “Great Vegan BBQ Without A Grill” to make you hungry: 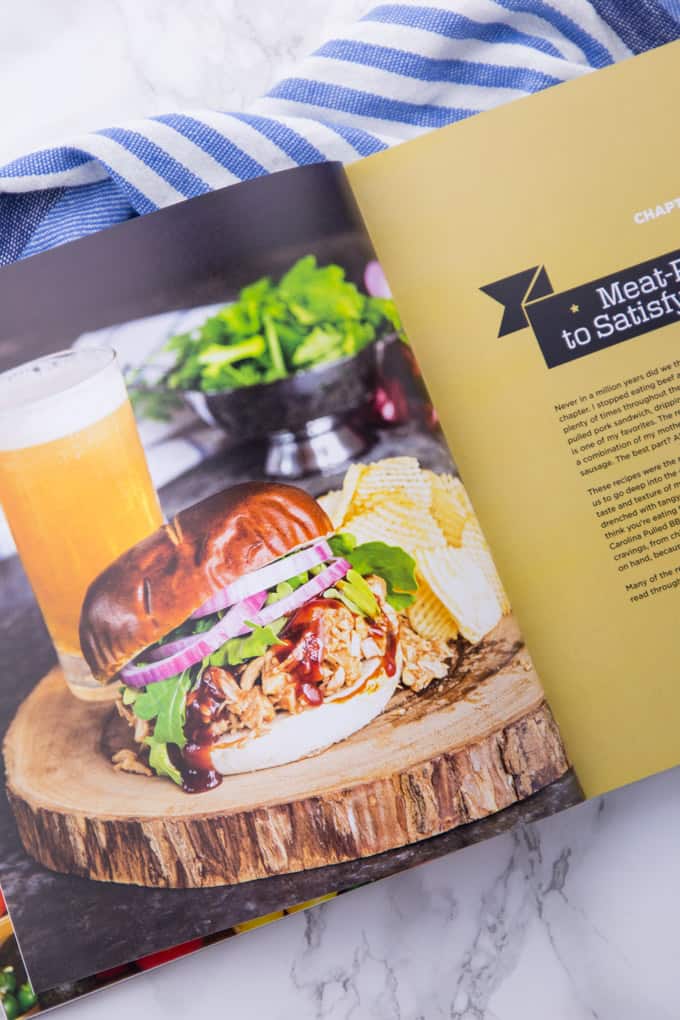 Are you hungry yet?! Of course all recipes are 100 % vegan although they have “meaty” names like the seitan ribs!

I hope you like the vegan ribs and the cookbook as much as I do!

**Copyright Disclaimer: The photos of the vegan ribs are from “Great Vegan BBQ Without A Grill”** 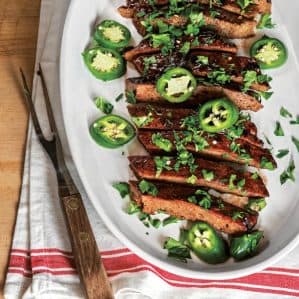 You won't believe how delicious these vegan ribs are! They're tender, meaty, and just in time for your next vegan BBQ! Serve them with crispy wedges and vegan ranch dressing and you will even impress meat-eaters!
5 from 2 votes
Print Pin Rate
Course: Entrée
Cuisine: American
Prep Time: 20 mins
Cook Time: 30 mins
Total Time: 50 mins
Servings: 6 servings
Author: Sina