This vegan chicken Alfredo with textured vegetable protein is so delicious, creamy, rich, and decadent. No dairy or meat needed! 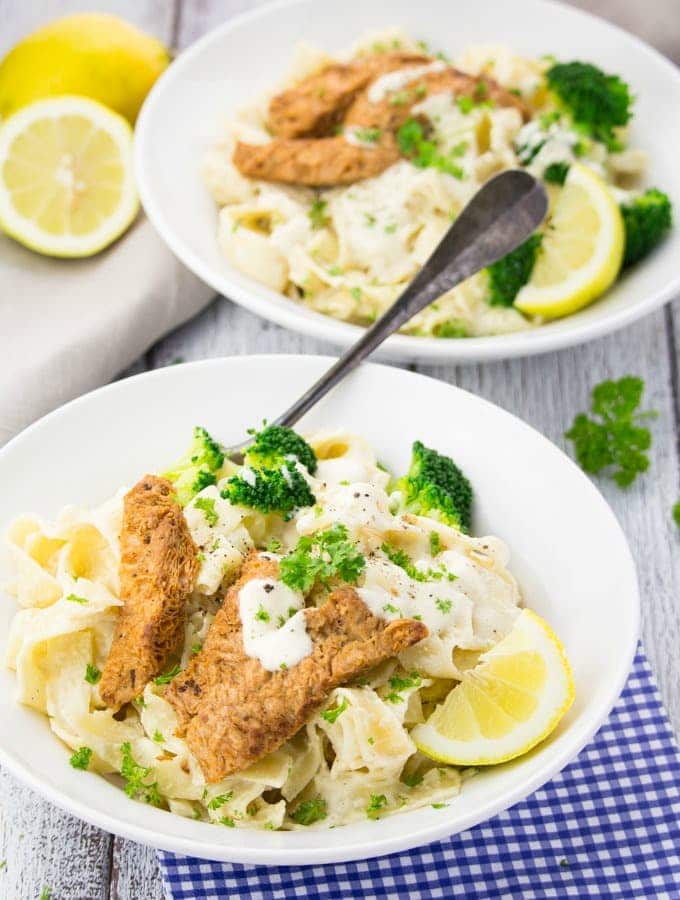 Before I went vegetarian almost 10 years ago, I used to love chicken alfredo with broccoli and fettucine. I actually haven’t thought about it for years and most of the time I’m not a big fan of vegan meat alternatives. When I realized that the textured soy chunks (also called TVP) I bought last year would expire soon I just knew now was the time for vegan chicken alfredo and surprisingly I really loved it!! I’ve made vegan fettucine alfredo many times before, but this was the first time I added vegan “chicken” and it was so damn delicious!! 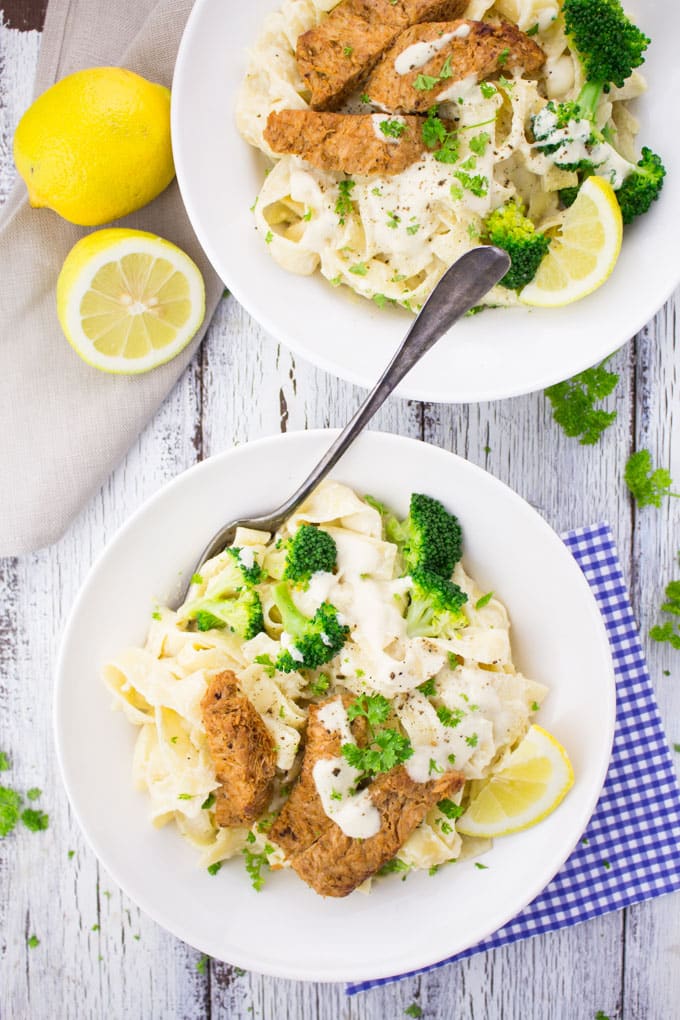 So what is TVP and how do I use it to make this vegan chicken Alfredo?

TVP is short for textured vegetable protein and as the name suggest it’s made from vegetable protein, most commonly from soybeans. It’s very high in protein and is an awesome vegetarian and vegan meat substitute. Its protein content is actually far greater than that of meat, which is amazing!

TVP is very easy to cook and comes in many different forms. You can either buy big chunks, shreds, or minced TVP. Minced TVP is great if you want to veganize recipes calling for ground beef or turkey such as tacos, Bolognese sauce, meatloaf, sloppy joes and many more.

I usually cook the TVP for about 10 minutes in vegetable broth, but I’ve also heard that some people just put them in a bowl, pour boiling water over them, and let them sit for a while. Once they’re ready, let them cool down a bit and then use your hands and squeeze out as much water as you can. They’re kind of like little sponges. 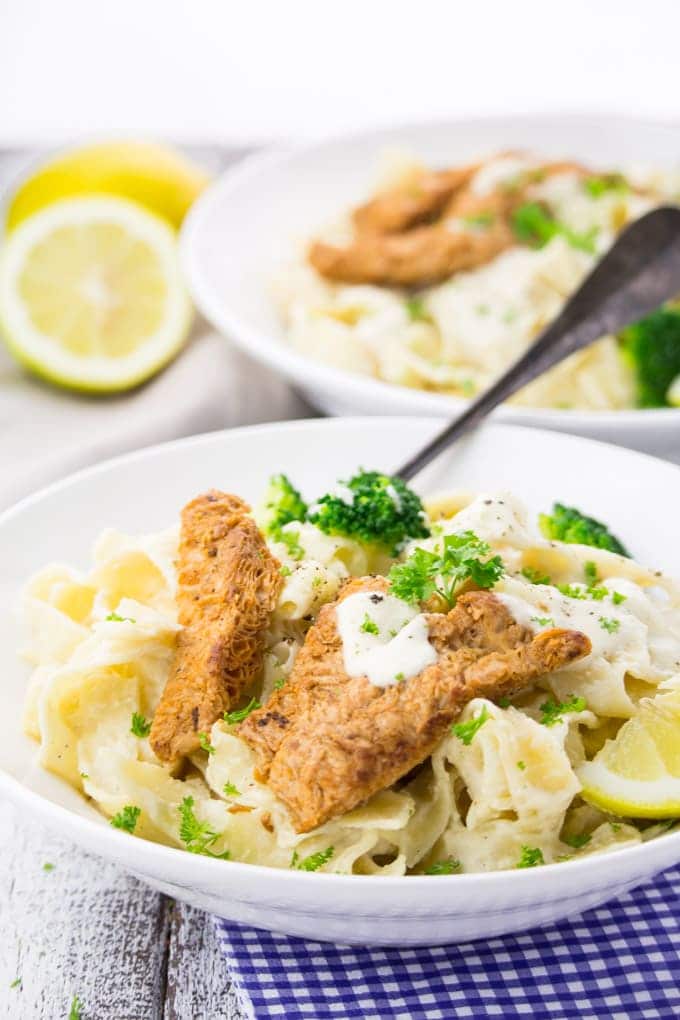 Textured vegetable protein was actually invented as  early as in the 1960s and was often used by restaurants as a money saver. Since the 1970s it has also been added to school lunchs at public schools.

It’s pretty cheap (usually about 3 to 4 dollars for one pack) and you can find it at any health food store or in the health food or bulk section of regular grocery stores. For this vegan chicken Alfredo I used medium-sized soy chunks, which I seasoned with soy sauce, liquid smoke, paprika powder, salt, and pepper.

Heat some oil and pan-fry them for about 5 minutes or until crispy and brown. Check out this awesome post on how to prepare textured vegetable protein by wikihow for more info. 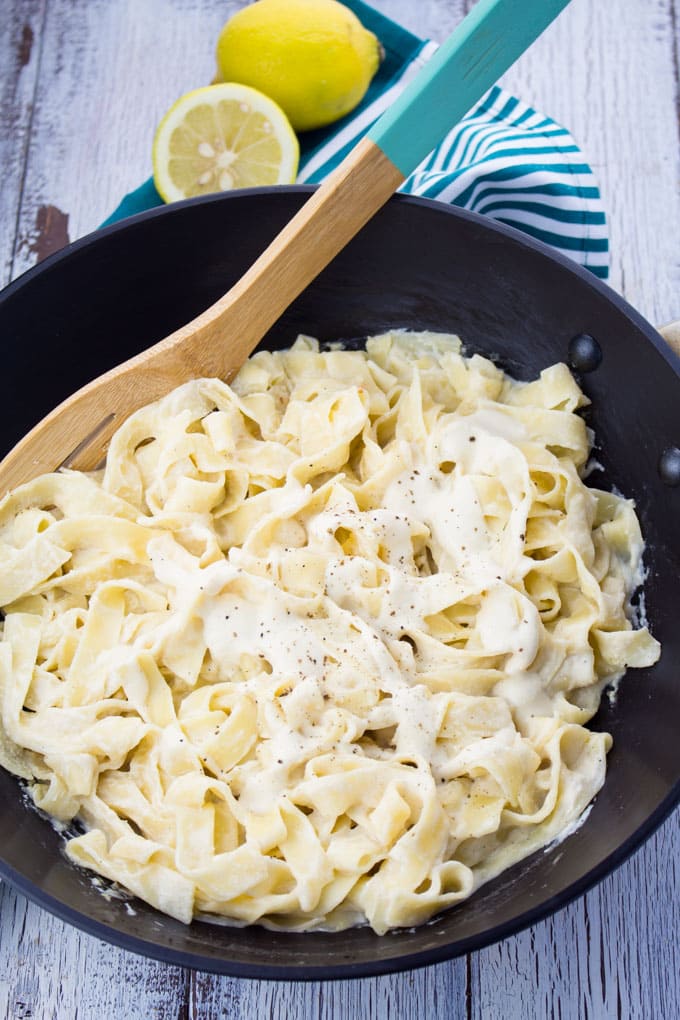 How to make vegan Alfredo sauce

For the vegan Alfredo sauce I used cashews, one onion, garlic, lemon juice, one small cooked potato, unsweetened almond milk, and a little bit of mustard. Just put all ingredients in a blender and process until smooth. The potato and the cashews make this sauce super rich and creamy! You would probably never guess that it’s completely dairy-free and doesn’t contain any oil or butter. If you want the vegan fettuccine Alfredo to be soy-free just leave out the textured vegetable protein and use more broccoli instead. The rest of the recipe doesn’t contain any soy.

I usually serve this dairy-free Alfredo sauce either with broccoli or peas. Sprinkle it with some fresh chopped parsley and you’re good to go… 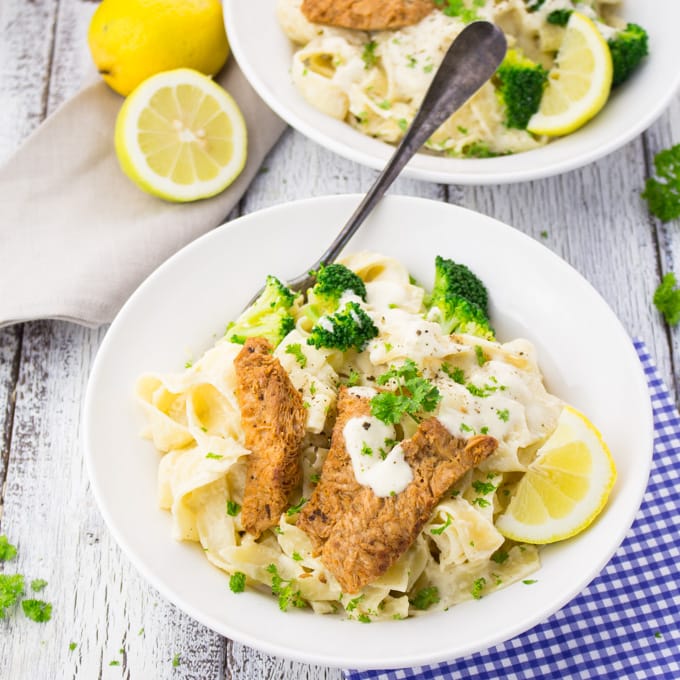 Let me know if you give this vegan chicken Alfredo a try! As always, I love to hear from you guys and see your Vegan Heaven creations on Instagram (don’t forget to tag me with @_veganheaven_).
Have a great week! – Sina, xx 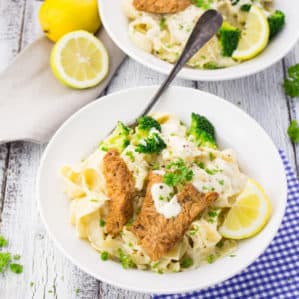 For the vegan alfredo sauce:

For the vegan "chicken" (TVP):

Tried this recipe?Mention @_veganheaven_ or tag #veganheaven!
Rate the recipe!If you like this recipe, please leave a good rating! This will help other readers.
Previous Post: « Birthday Donuts with Funfetti
Next Post: Carrot Cake Overnight Oats »