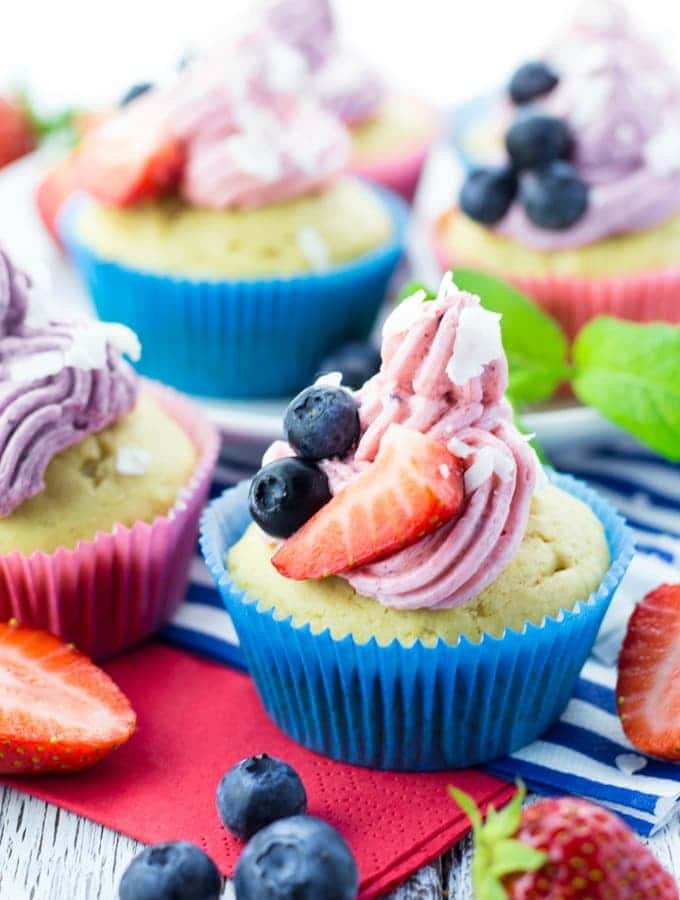 Can you believe that these are the first cupcakes I’ve ever made?! And I’m not just talking about vegan cupcakes, I mean cupcakes in general. I’m a HUGE fan of muffins and bake some almost every other week, but somehow I never got around to making cupcakes. Well things were about to change when I made these vegan strawberry cupcakes last weekend! 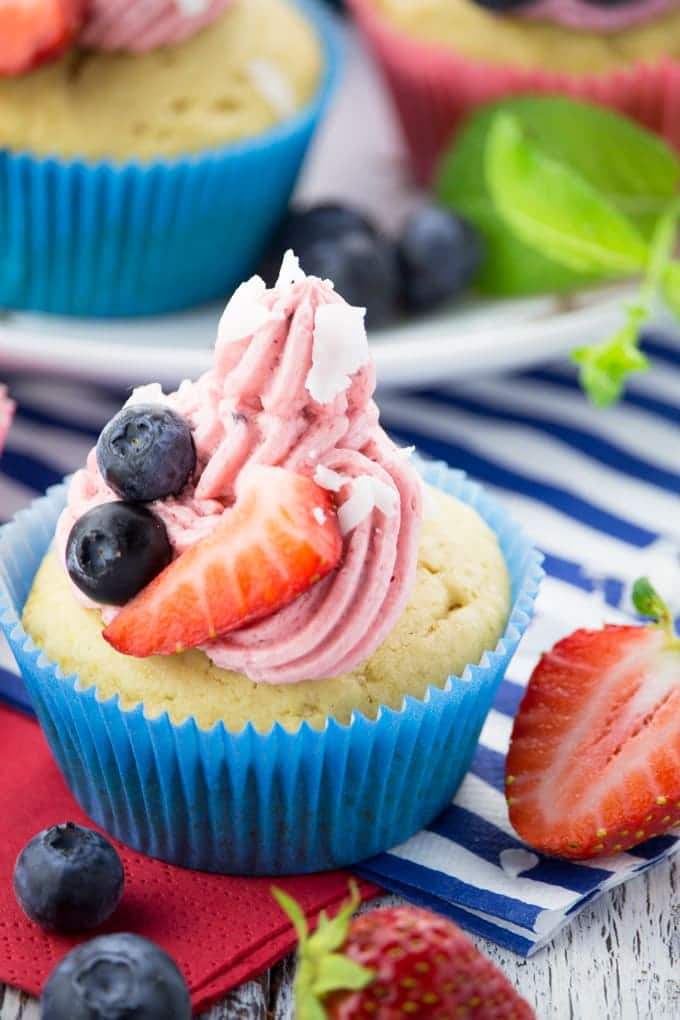 I actually intended to make vegan 4th of July cupcakes with a natural strawberry and blueberry frosting, but they turned out to look a bit more girly than I thought. Haha! I mean you could probably still bring these vegan strawberry cupcakes to a 4th of July party and make a decent impression, but I think they’d be even better for a girls birthday party! Miniature vegan birthday cakes in pink and purple so to say. ;-) 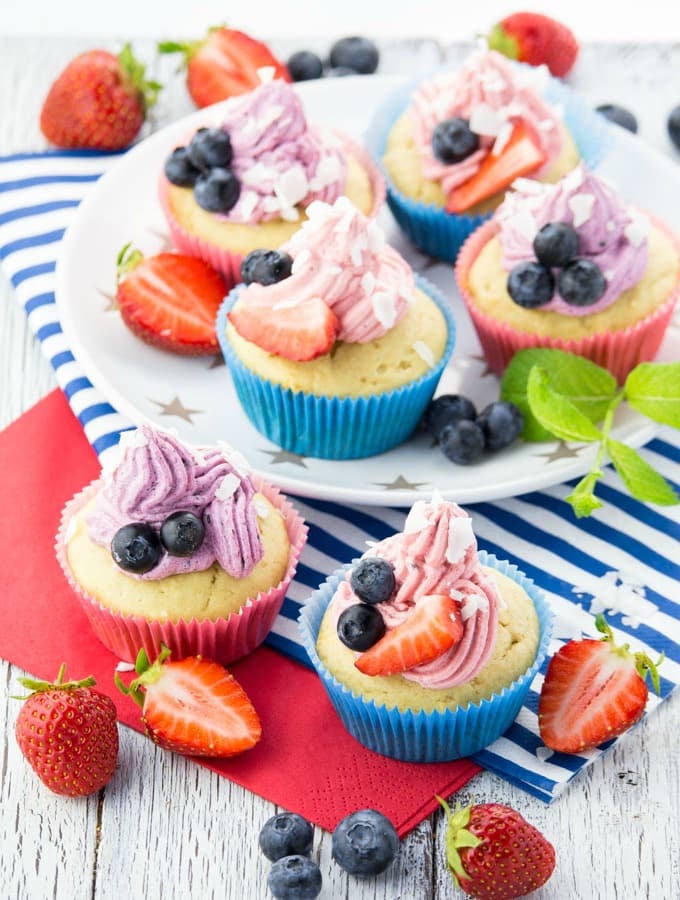 Making vegan cupcakes is super easy! Instead of eggs you can just use a couple of tablespoons of apple sauce and some apple vinegar. To replace cow’s milk in baking, I usually use almond milk, but soy or oat milk works as well. Although a lot of people still think vegan baking is extremely complicated, it really isn’t! 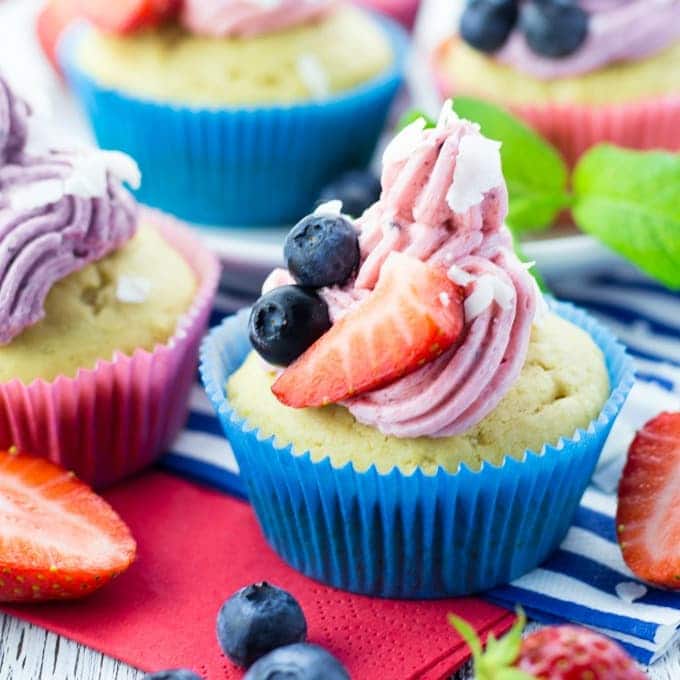 Once you know how to replace eggs and dairy, you could even just veganize old baking recipes. I’ve done this a couple of times and it always worked out pretty well. The only time it didn’t work out was when I tried to make a vegan sponge cake using my moms old recipe, but that was probably my fault because I left it in the oven for too long. She used to make me a sponge cake filled with whipped cream, bananas, and mandarins for my birthdays and I really gotta figure out how to make a vegan version of it! Once I’ve perfected the recipe, I’ll share it with you guys.

But back to the egg replacement…

For binding, you can just use one tablespoon of ground flaxseeds with three tablespoons of water. This equals one egg.

For adding moisture, you can either use 1/2 cup of mashed ripe bananas or 1/4 cup of unsweetened apple sauce. 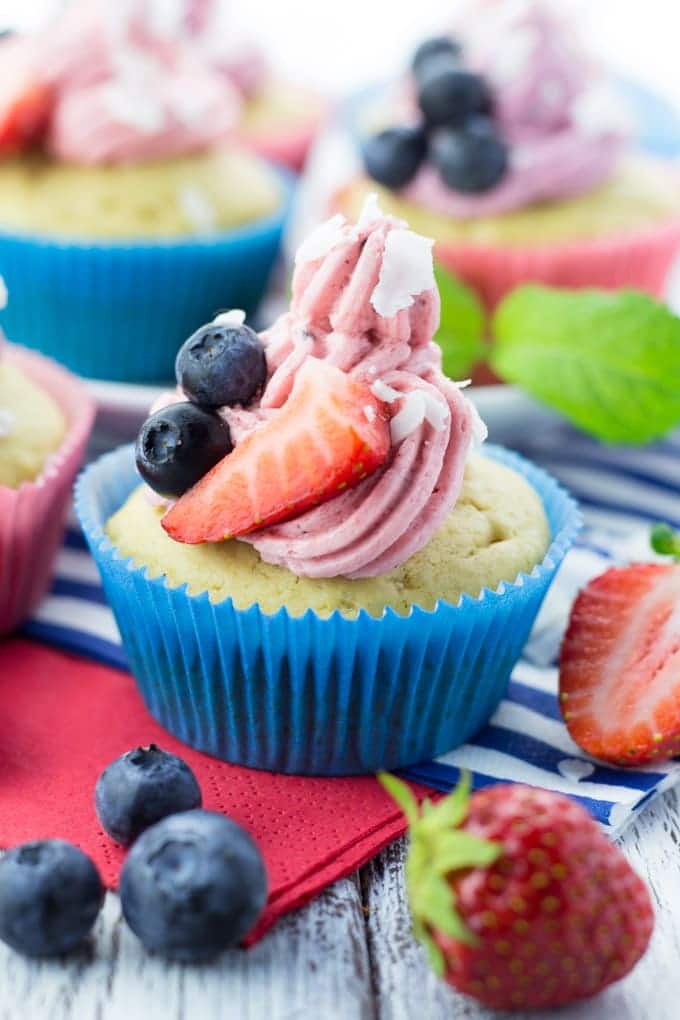 I hope you like these vegan strawberry cupcakes! Let me know if you give them a try. As always, I absolutely love hearing from you guys! 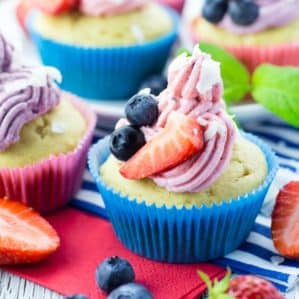 For the strawberry and blueberry frosting:

Tried this recipe?Mention @_veganheaven_ or tag #veganheaven!
Rate the recipe!If you like this recipe, please leave a good rating! This will help other readers.
Previous Post: « 4th of July Fruit Salad
Next Post: Vegan Taco Salad with Lentil Walnut Meat »